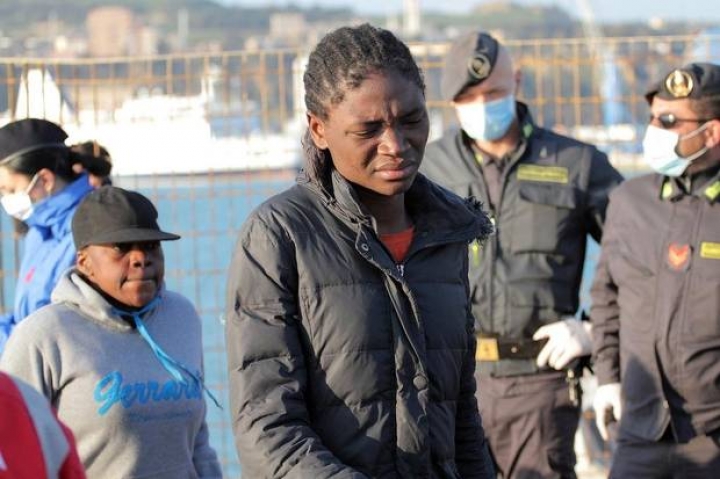 by Marta Bernardini e Francesco Piobbichi Lampedusa, Agrigento (NEV), April 15th 2015 – The press and the media have broadly covered it and we could see it directly: in the last few days the arrivals have increased. More than 8,000 immigrants have landed on the Italian shores. On Monday, a boat capsized off the coast of Libya, causing nine deaths. A new tragedy of enormous range happened: 400 persons died after a ship sank 24 hours after leaving the Libyan coast. Most of the immigrants were young and probably minors.

Two things catch our attention. The weather conditions in March slowed down departures from Libya. Now, they have started again and this new course has been very consistent since the weather got better. Secondly, many more persons died in these first months of 2015 compared to the same period in 2014. The UN High Commissioner for Refugees says, in fact, that from the beginning of 2015 the number of deaths has significantly increased, compared to last year. We are talking about almost 1,000 deaths and about 20 in the same period of 2014. It is not clear if arrivals decreased temporarily only due to the bad weather or if local powers in Libya keep on using people as an element of political negotiation and gain. We expect a difficult spring and summer in which tragedies, dead and data will be exploited by the media and politicians who will accuse each other trying to get rid of their responsibilities. The Italian Coast Guard cannot continue to face alone this flow and Triton is clearly inadequate to prevent deaths at sea, as indeed, albeit with smaller numbers, it was Mare Nostrum. Trying to prevent harm, in fact, cannot be a strategy entrusted to the technicality of rescue operations. It has to be addressed by politics. The debate on strengthening rescuing operations seems to be the only one on which we have focused on, by hiding the underlying attitude that since months Italy and Europe have put into practice: rescuing without reception. Just this week, in fact, for the first time we saw the Tunisian Cost Guard in action. They recovered about one hundred refugees from Libya and then they took them to Tunisia, as the Interior Minister Alfano recently announced. They called the operation “Safe Sea”. It is a real intervention of providing rescuing services in outsourcing. This process – we read in the press releases – should act as a deterrence for immigrants leaving from Libya, avoiding other tragedies at sea. But what happens to the migrants brought to Tunisia? They will find other routes, even riskier, but they will certainly do not stop. In the end, the most interesting aspect to be reported is that the mobile Mediterranean frontier shifts and changes, bringing away tragedies and responsibilities from our TV screens. There have been deaths. There will always be deaths. Our eyes and our conscience are now accustomed to those tragedies and we can now say that the “Banality of Evil” has taken over. In Libya, the situation of sub-Saharan refugees is tremendous, just as it is in many other Mediterranean countries. Think about the metaphor of the Yarmouk camp, where Palestinian refugees are again forced to flee due to the war in Syria. The humanitarian corridors are not mentioned anymore. Everybody talks about an emergency but nobody really wants to tackle the issue. Many, including us, are pushing for a special meeting of the UN Security Council and for a global reception plan in which every state that adheres to the Charter of Human Rights do its part. We do not understand why the Security Council will convene to discuss only humanitarian wars and not to build global responses in the face of tragedies such as these. If we want to save these people and avoid more deaths at sea, we should press the embassies of nations that joined the Charter of Human Rights to rescue these boats: this would avoid tragedies and cut criminals’ profits. And while in this springtime immigrants are still reaching our shores, Lampedusa raises a strong, clear voice against exploitation, wars and violence, for a peaceful, beautiful and fair Mediterranean. It will be louder on May 1. Lampedusa organizes, as stated in the press release, “a day of music, dialogue, struggle and political proposals to reiterate the need to face migration issues to the root starting from the causes that push thousands of people to leave their countries. To reiterate the need to put an end to military interventions. To reiterate Lampedusa residents’s will to live off fishing and tourism on and island of peace, dialogue and beauty without cyclically ending up in ‘emergencies’ that were sought and built. ” This is not a banality in a nation where richest Northern regions oppose welcoming immigrants and leave the reception centres in Sicily and on Lampedusa full of a suffering humanity, impoverished by war and exploitation.