For a Humanitarian Corridor to Avoid Death at Sea 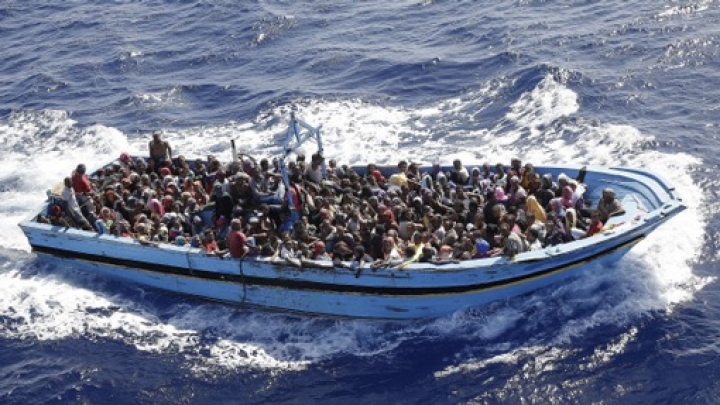 by Giacomo Russo Spena,  journalist
from MicroMega, May 19th 2015

FCEI and the Community of Sant’Egidio have launched a campaign to create a humanitarian corridor for immigrants: “That is a wise and proactive proposal”. The project would be funded by the 8 x mille (Eight per thousand of the income): “We propose to the Government a reception system free of cost. It would also be a model exportable to other countries.”

The Mediterranean is a water cemetery where the bodies of the rejected, humiliated, tortured are buried: men, women and children who are now at the bottom of the sea. A humanitarian corridor is a proposal to save thousands of people fleeing from war, famine and epidemics, and to control savagery. Our savagery. 8 per thousand, funds would support our project without burdening the State finances.

The Federation of Protestant Churches in Italy (FCEI) and the Community of Sant’Egidio – the project promoters – believe that this humanitarian corridor could be a “good practice”, an essential action to save lives and break the physical and ideological barriers between “us” and “them.”. Without claiming to solve the old issue, the proposal takes on the political significance of consolidating the commitment of Italian and other European countries to prevent deaths at sea. We are still human.
But do not say that this is a do-goodism project , a term in vogue. “Our position is simply a realist,” replied Paolo Naso, Waldensian, professor in Political Science at the University of Rome. “Blocking these immigration flows is a hypocritical and  politically senseless,illusion, pushed by the xenophobe right parties”. And it also compromises  the principles of solidarity and the human rights enshrined in our Constitution,” Naso said. “It is impossible to stop migration flows which are the result of wars and persecution. Desperation could climb any wall “.

In such a global scenario, the West is not without responsibility as it has increased the condition of political instability in many areas. The geometries of diplomatic alliances in recent years have been variable and dynamic: now we cooperate with states until recently considered “rogue” to isolate Islamic fundamentalists. We support rioters against dictatorial regimes which were economic partners. We arm populations previously considered terrorist supporters, in name of the right to exist as ethnic and religious minorities. So the recent humanitarian  bombings (oxymoron par excellence) in Libya have increased, according to UNHCR, the numbers of refugees on their way to Europe. Over 10  percent of them are unaccompanied minors. Too many. And the number of single women has increased.

“We offer to the State reception free of cost, a model exportable to other countries,” said Paolo Naso, MH spokesman. MH began last year, supported by the 8 per mille funds. It is a humanitarian and social  way of conceiving reception. It starts from the integration of refugees who want to stay in Italy. Now, this essential humanitarian corridor will cost 500 thousand Euro. “We are receiving many requests of international partnership, it is a sign of hope. The opening of humanitarian channels from Africa is now socially requested, “announced the FCEI giving maximum transparency over the accounts Other Protestant churches in Spain, Holland, Germany, Austria are interested in importing the Italian model. And they are funding the campaign Mediterranean Hope. A humanitarian corridor is more and more requested.

On May 20th, the first group of volunteers will leave to Rabat and Tangier, in Morocco. The first humanitarian corridor will start from there. The embassies will have a key role and the task of receiving requests and issue visa under the humanitarian protection. Specifically, a channel to obtain visas for humanitarian reasons would be open in countries from which migrants leave, in coordination with the Italian embassy. Once obtained, the applicant will be able to board a regular flight and upon arrival in Italy, claim asylum, thus avoiding risky boat trips and human traffickers.
The “pilot project” of the Waldensian community appeals to a legal technicality of the European laws: a Regulation would establish the Community Code on Visas, namely the possibility of granting visas with limited territorial validity, notwithstanding  the entry conditions of the Schengen Borders Code, “for humanitarian reasons or national interest or because of international obligations.”

In the meanwhile, a recent Ipsos survey shows that immigration is overestimated (1/4 of the sample believed that one out of every two in Italy is of foreign origin) and considered a cost to taxpayers (nearly 70 percent of the sample). A specific political density – needed by the authorities to cope with crises –  can be ascribed to fear and racist discrimination. There is also a social density, part of relations of production: it is no mystery that the Lega taps into people basic instincts of fear forging a “war between the poor “. People fear an invasion, even if the numbers tell a different story.

According to the United Nations – as reported by Internazionale – migrants are on the rise since 1990, although they are only 3 percent of the world population: “We are not in an emergency situation, it is difficult, but structural.” As for the numbers, migrants arrived in Italy in the first four months of this year are less than those reached in the same period of 2014. According to the UNHCR, between January and April 2015, 26,165 migrants arrived in Italy, while in the same months in 2014, the arrivals were 26,644. Arrivals are almost identical in numbers, but the number of death at sea is increasing,  because of  the suspension of Mare Nostrum, stopped purely for economic reasons. The data of the Interior Ministry on the outcome of the rescue operations carried out by the Navy and Coast Guard as part of Mare Nostrum reported numbers higher than 110 thousand people, at a cost of about 10 million euro per month, with a number of death at sea lower than the actual one. From Mare Nostrum, we moved on to Triton, to patrol the coast of the Schengen area and to wage war against traffickers, with the possibility of bombing at sea.

What is the result of abandoning Mare Nostrum? A simple and obvious, increase of the human trafficking. Migrants turn to them, not vice versa, paying disproportionate numbers and knowingly endangering their lives to reach Europe. Smugglers would do great business in the open market from external border control and they exist because those fleeing from wars or poverty cannot enter Schengen with ordinary means of transport (ships, aircraft, cars).

These days in Brussels, politicians are discussing migration policies in view of the summer. The plan of the European Union is based on three pillars: increase in funding for Triton and Poseidon, the military missions that intercept smugglers boats; a plan for the redistribution of migrants among the European countries according to the economic possibilities and the population of each country; the following military action to destroy smugglers boats before they leave. There is still much confusion about quotas. It is a partial overcoming of the Dublin Regulation (a treaty that forces immigrants to remain in the European country of arrival).

“Those reminding Europe that it is high time to address immigration with a olistic view and to stop thinking Europe as an assaulted fortress are right,” wrote recently Marcella Lucidi on Italiani Europei website. We got to choose whether to remain excluded from the major processes in place waiting for others to push for relations, changes or conflicts, by investing the resources on the growth of the African economy or, otherwise, by exploiting it. Or, if you get into those processes with a common foreign policy that places Europe in a system of alliances useful to handle the most serious crises, including those affecting the Mediterranean, and especially Libya. ” Also the Waldensian community is not satisfied with the latest EU measures: “That is not enough”. They are ready to start the Humitarian Corridor. It is and urgent issue. It is a choice for civilization.