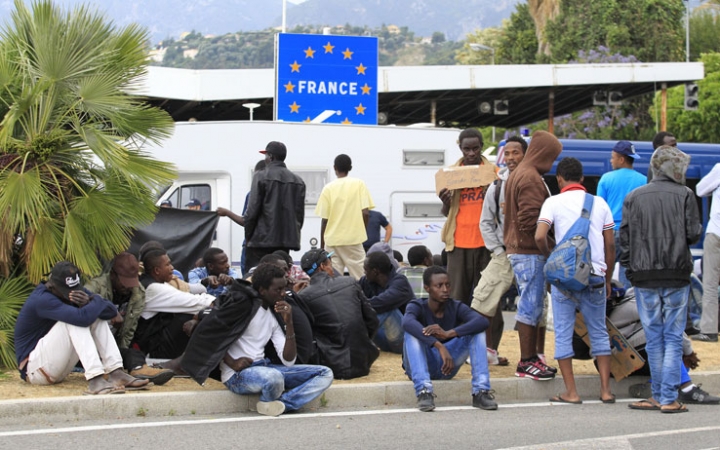 Lampedusa, Agrigento, June 17th 2015 – For those living on a border, as the people in Lampedusa, what happened in Ventimiglia is sobering. Firstly, because it has confirmed that the majority of immigrants do not intend to stay in Italy despite talks of an invasion on the media.

Just few days ago, in fact, ISTAT has again reported that the number of immigrants who have entered our country has decreased whilst there is an increasing in the number of Italian citizens leaving their homeland due to the economic crisis. Secondly, because what we have claimed for a long time (that the immigrant landing on Lampedusa bear the sign of their conditions) is confirmed by these days images. The border – its mechanisms, the rhetoric taking shape today – stays with the people who crossed it, adapting and transforming itself dynamically according to the situations they live. Ponte Mammolo, Milan Central Station, the border in Ventimiglia are nothing the continuation of what we have seen in Lampedusa for years. A border that becomes wider through collective fears, newspaper headlines and an ongoing campaign on a state of emergency. The fear of scabies, for example, an easily and quickly treatable skin infestation, has become the main mantra through which the media construct the separation between Us and Them in everyday life. Last week we wrote about the poor pushed across borders and about the fact that one of the first right denied to those arriving here is their freedom of movement. A freedom which they try to exercise with their bodies, fully using them against the boundaries of exclusion. They do it by peacefully going against European policies. It is a spontaneous disobedience against policies that are inherently unfair. What happens in Ventimiglia, then, is nothing more than a complaint against the inadequacy of the Dublin directive, against the logic of European borders. Few days ago, while we were watching the events unfolding in Ventimiglia (turned into a theatrical stage as Lampedusa), a pictures of Bulent Kilic on the border between Syria and Turkey was published and there came the news that a 18-year-old boy died in Melilla as he tried to cross another wall. Images and news that make up the mosaic of a migratory phenomenon with an intensity and consistency not seen since the Second World War. As we write this article, we have not a clear idea yet of the results of the Summit of European ministers. From the first news emerging, we do not think that much has changed, since there is no binding agreement between States to redistribute quotas of refugees and asylum seekers – we continue to talk about numbers and not people. What seems clear is that once again countries like France, which have contributed with their policies of war to devastate entire nations, keep on just sending police to prevent innocent people to find and reunite with their family. In these days, a young student from Sorbonne University, Becard Gabrielle, is supporting the activities of MH in Lampedusa. On what is now happening on the border, she says: “The events of Ventimiglia remind me of what happened in Paris inside the 18th arrondissement, when several camps were evicted, causing indignation of some of the citizens who came to defend migrants”. The experience of Gabrielle in Lampedusa has enabled her to speak about what she already witnessed in her country: “I have a feeling”, Gabrielle says, “that there is a disconnect between political choices, police actions, and those who live directly on their skin the experience of the border: not only migrants but also the local people experiencing in person the consequences of what is decided elsewhere. Despite the violence and the climate of intolerance that I have witnessed in the widespread evictions in Paris as much as in the images from Ventimiglia, I could see that there is humanity, especially here in Lampedusa, where people are still sensitive and able to fight for the dignity of arriving in Europe “. Human bodies are marked by these borders, a reality that moves with those who cross it: from the desert in Libya to the Mediterranean, from Lampedusa to the Turkish-Syrian border or Ventimiglia.