If the rescued at sea grow weak… 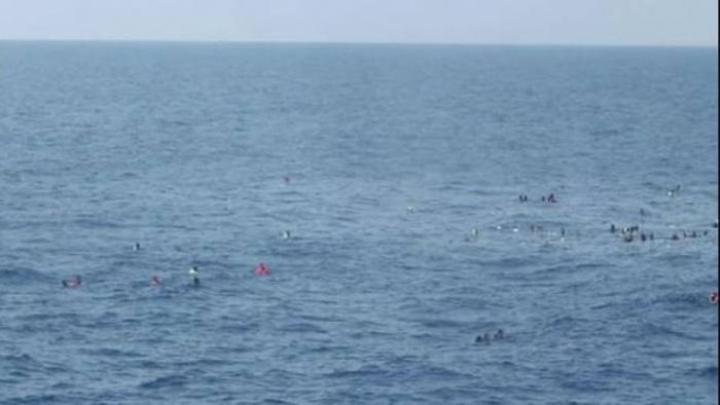 You die there or you die elsewhere. From Ceuta to Zwuara you die, you die suffocated in suitcases, along the tracks, in boats that sink, you die closed in the holds. The summer of 2015 is very harsh, which has followed a spring that seemed to see less deaths at sea. Last night dozens of survivors from the last shipwreck off Libya arrived in Lampedusa: women and men exhausted with wounds and fractures, in shock; a mother whom in the days past had been looking desperately for her little girl of 5 months old, never to be seen again, swallowed by the sea. The story that took our breath away was of a courageous Palestinian father who miraculously swam to save his wife and daughter from the waves. These migrants are just small dots that the sea swallows forever, as can be seen from the photo that was published by the Navy after the tragedy a few days ago. They form the punctuation of a history submerged forever by the waves. And then there are the stories of those who managed to get to Italy and Europe, but remain stranded in our reception system. Yesterday morning a group of Eritreans children were found heading from a reception center to the port of Lampedusa, because they were assured that they would leave for Sicily, along with other fellow travel companions, but this has not happened and they were separated.

Do all these stories, and those unknown, affect the European policies in any way? No, not really. Indeed, if we read what one of the most attentive observers of what is happening in the border of Fortress Europe writes, the professor Fulvio Vassallo Paleologo, from Palermo, we will realize that perhaps this recent increase in accidents at sea has responsibilities. Paleologo writes in his blog “from the month of July the activities of search and rescue of Frontex missions in the Mediterranean have become less frequent, but pressure on states grows exponentially, and therefore also on the member countries’ police forces to tighten identification activities as per the Dublin Regulations and EURODAC by adding to the usual photo-signaling, a forced removal of digital fingerprints, even with the use of force.” If you hear some sources, and look more carefully at press releases, it seems that the operation Triton has lost track. If we read the news properly we realize that many rescues are attributed to Triton but are actually made by the Coast Guards or other commercial vessels. Even the numerous military ships that operated until June in the quadrant south of Lampedusa seem as though they have disappeared or, apparently, have been moved much further north, near Malta. Few military ships are operating, with the exception of Ireland, which independently is intervening effectively in rescue at sea. We are waiting for new developments of the operation Eunavfor Med, and it is difficult to understand what is happening at this time in the Mediterranean Sea, which is distant, yet at the same time close to us.  And yet something new appears to have been produced this year which is an important fact for us. The intervention organized by the civil society in the sea, which seems to compensate for the fact that the rescues have been less frequent, is an interesting novelty to be taken as an example for the future. We talked about this in Lampedusa with an international journalist, Stefano Liberti. Liberti has been on one of the ships of Doctors Without Borders (MSF) and has seen up close the rescues at sea, a direct observation that allowed him to grasp some news on migratory routes, for example, that the departures occur almost exclusively on inflatable boats and are aimed at a specific quadrant of sea near the oil platforms. Liberti has explained some of the changes: “initially, to make up for the lack of rescues at sea, the private initiatives were taken by Moas in 2014, which were followed by initiatives of MSF in the summer of 2015. The operational mode of these missions is integrated in the mechanism of search and rescue operations coordinated by the Coast Guard. These initiatives” – continues Liberti – “are thus not only symbolic, such as the Kap Anamur of 2006 that violated the laws then in force, but also (the missions of MSF) have a political approach. Unlike Moas, declaring expressly that they do their best in rescuers operations at sea because Europe is not doing enough.” For the journalist, “these operations are much more open for the press compared to those of the Navy; they communicate mostly, and in a different way, the stories of the people. Moreover, these missions have a less insensitive approach. If we look at how both Moas and MSF communicate via Twitter, we realize that they have a way of dwelling on the migratory phenomenon focused on people.” The real risk for Liberti, does not arise from the fact that such rescuers can replace the role of governments by taking responsibility away, but that it will divert attention from the real issue, that of opening humanitarian channels. From the facebook page of Doctors Without Borders, written after some rescues occurred in early August witnessing the discovery of five people who died from the long trip, we read: “This incident highlights the need for greater capacity for search and rescue operations near the coast of Libya, since any delay can be a matter of life or death”, said Loris De Filippi, the Italian president of Doctors Without Borders. Adding that, “until new legal, safe channels to secure protection in Europe are created, the vulnerable people will continue to risk their lives on overcrowded boats.”