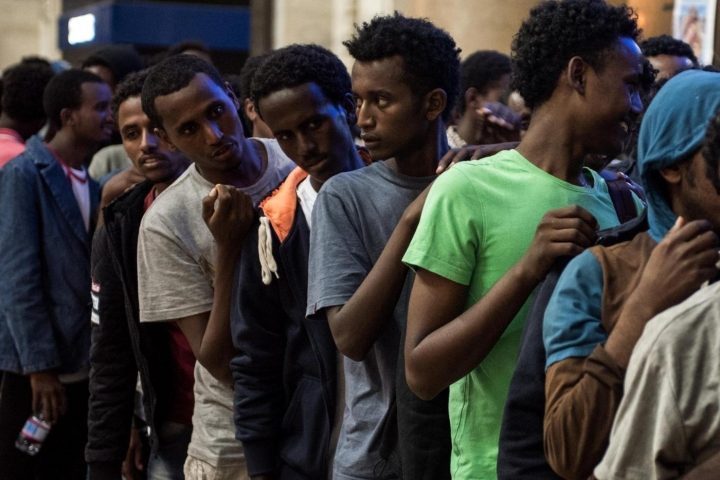 Dreams, hopes, family conflicts, disappointments: none of these feeling are taken into consideration. We tend to simplify immigrants’ conditions. We label them as desperate, fleeing from war and famine, or as illegal who came here to steal our jobs. The xenophobic right-wing position, when not openly supporting shipwrecks, aims at representing immigrants as a threat to Italy’s economic social and cultural (!) stability. On the other hand, the left-wing position that supports reception tends to exaggerate the humanitarian rhetoric and to cope with the reception issue with an appeasing attitude. Both positions produce and foster a specific form of violence: a symbolic violence that hides the historical, cultural and biographical complexity of people involved. This system of symbols leads to a particular world vision: because immigrants are considered desperate, just giving them the opportunity of a new life here is enough, no matter how marginalized they would be. What these people really want is not an issue. Just think about the variety of controversies that arise whenever an Italian university decides to allocate scholarships to refugees. “Eh no, one thing is helping immigrants, but giving them more chances than my son… and maybe one day they would take his job…”. “Black remains black” is the main idea hint by this kind of argument that mixes in a deadly cocktail racism with a class-conscious mentality.

This is what comes to my mind when I think about Amadou, who interrupted my explanation about his rights as minor to point out that to him education is more important than a visa. “Education, I need education”. This is what Amadou told me with a trembling voice. He cried when he told us about the tortures he endured in Libyan prisons to reach his destination. Education was the reason why he left Gambia to Italy. His voice lowered, his tone became unusual while explaining the reason for his journey: his parents had arguments on the issue of his education and his father abandoned his mother. Amadou’s father wanted him to work the family land while his mother would rather send him to school. After leaving his family Amadou’s father did something while his mother died. The strong voice of Amadou became a frightened whisper charged with memories of death spreading all over the room. The fan’s noise sounded like the buzz inside Amadou’s head. Should I explain what really happened? Would this white man believe me? “Was it a Ju-Ju?,” I asked . Amadou did not expect this question. He told me that it was a sorcery attack that in English-speaking West Africa is often described as Ju-ju. Then, he went back to education as education was the main reason of conflict in his family and he considered this point as an element to solve the family crisis. He knew I understood very well his language and he told me he was afraid to be here. Then, he spoke of Libya again. When he started again to babble and cry, I sent for my colleague who is also an imam and he asked him to recite some verses from the Quran. Amadou calmed down and asked me if he could study. I smiled. I told him he could attend the Italian course at the centre and he went away saying good bye.

Amadou reminded us of the complexity of these lives. These are the lives of individuals with their own cultural background. They are often political actors who are not just looking for a piece of paper or a job. They have personal plans, simplified by an immigration narrative, which tends to hide and neglect important details.