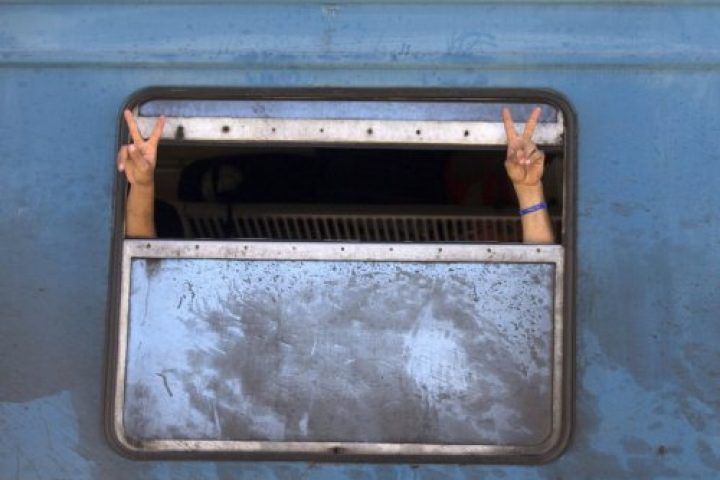 Lampedusa, Agrigento (NEV), 16 September 2015 – The situation in Lampedusa seems calm now. There have been no arrivals for more than a week and this morning the reception centre was empty. On Monday, people have been rescued in the Strait of Sicily, but their numbers are small compared to the recent past. This apparent calm, perhaps due to sea condition, could stop overnight with a sudden boost of arrivals, as it happened in the past.

Meanwhile, the news all around us keeps on telling us the story of many refugees moving between borders and boundaries. And unfortunately, the news also talks about people dying, as it happened yesterday off Turkey’s coast. Hungary, while erecting a barbed wire wall, has deployed since yesterday military personnel to enforce a new law allowing authorities to arrest and expel those entering illegally: nearly 10,000 migrants has already been detained and 174 arrested along the border with Serbia. This is because the flow, especially from Syria to Germany, does not stop. Border controls in Germany, Austria, the Netherlands and Slovakia are still on, while France says it is ready to set them up along the border with Italy. Yesterday, another summit was held in Brussels, and European countries once again did not find an agreement on the so-called refugees’ quotas. The German Minister of Interior, Thomas de Maizière, raised the possibility of “pressuring” those European countries that do not adhere to the principle of immigrants quotas proposed by Junker in his plan, hinting at possible sanctions or cuts to EU funds. Tensions are building up between those European countries, which do not want quotas, and those, which host a raising number of migrants: the lack of solidarity is surprising. Instead, ministers in Brussels decided to keep on fighting smugglers. They approved Eunavfor Med operation’s second phase: “European ships have the green light to stop and check in international waters migrants boats, with the authority to confiscate and destroy them, always aiming at saving lives”. It is difficult to understand what is really new in this operation, compared to the current practice: vessels are often already sunk after rescue missions, and we do not know anything about many other boats. Performing these operations in international waters could instead create the conditions for a military intervention in Libya, which in any case would require UN approval. What raises doubts is the possibility of hijacking migrants’ boats, as mentioned in a document explaining the operation’s goals: how can we save lives on the one hand and on the other send migrants back to lands where they witnessed violence and abuse? The decision to set up hotspots raises similar doubts. Hotspots are, in fact, new centres for identification and expulsion. They would be built in the South, for example in Lampedusa. The largest one, which will host up to 500 persons, would be built on the island. Others would open in Trapani (400), Pozzallo, Porto Empedocle, Taranto and Augusta, where the centre would host 300 migrants.In terms of reception, this seems to be a step back: migrants would be identified despite their desire to remain in Italy. Those who would not be granted refugee status are expected to return at the expense of the European Union. This decision seems to match the EU request of identifying immigrants as a prerequisite to relocate to other countries in Northern Europe. In this framework, Lampedusa could again become crowded with migrants who are going to be locked inside a centre where they are supposed to stay a few days but, because of the usual bureaucratic delays, will stay longer, risking repatriation. Fulvio Vassallo Paleologo wrote: “Merkel and her European colleagues have imposed to Italy conditions impossible to fulfill in the short term: this is a way to avoid accepting the transfer of asylum seekers who are already in our country to Germany or other European countries.” Apparently, the Brussels summit did not reach any conclusion beside announcing Eunavfor Med developments and the establishment of new identification and expulsion centres with a less unpleasant name. The tendency is to strengthen borders control and repatriations instead of proposing a legal way to get to Europe. EU seems to choose policies designed to combat human trafficking with military force or through expulsion when in fact the best way would be to set humanitarian corridors.