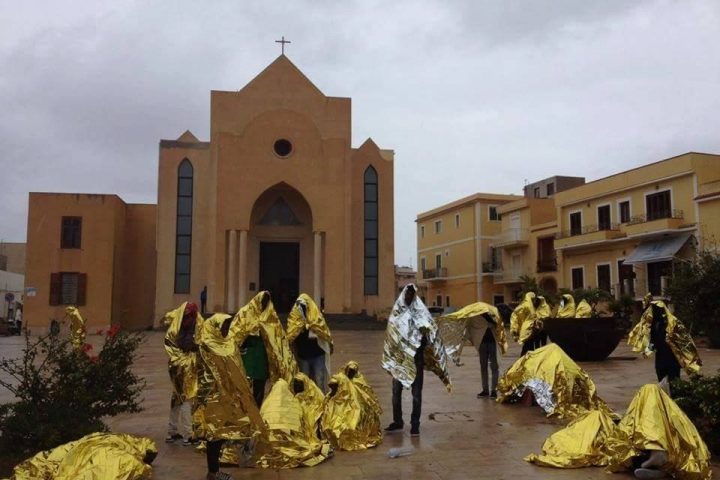 Lampedusa, Agrigento – The sirocco wind has been blowing on this rock in the middle of the Mediterranean Sea for days now, bringing with it new red colours from the Sahara and a dark and grey atmosphere. The desert sand falls down on the day-to-day life of Lampedusa, with its shops that slowly come to life as they prepare for the upcoming summer season and the first tourists who will wander through the streets savouring the island’s beauty. The quiet and apparently calm atmosphere has been broken for the past six days by the unusual presence of a group of about sixty people, who have decided to leave the Lampedusa hotspot to protest first in front of the San Gerlando church, and now in the square outside the Mediterranean Hope office.

The protest by migrants from Somalia, Eritrea, Darfur (Sudan), Yemen and Ethiopia, including eight children and five women (one who is four months’ pregnant), results from a combination of reasons. During the last few days, attempts have been made to speak with the young men in an effort to break down the distance that divides “us” from “them” trying to understand the causes, motives and purpose of this manifested discontent. They do not want to break the Italian and European laws, but want to fight to obtain those rights protected and defended by Europe.
The young men, as stated in a meeting held inside the church and organised by some of the island’s civil leaders, complained about the poor hygienic conditions of the centre in the Lampedusa hotspot, noting for example how many mattresses are constantly soaked with water coming from the bathrooms. The migrants also don’t understand why they are being kept in a prison-like centre, even though they have not committed any crime, except that of fleeing from conflict, persecution and poverty. Another central issue highlighted by the ongoing protest is the taking of digital fingerprints on the island of Lampedusa. The migrants explained that they initially refused to give their fingerprints because the identification procedures carried out immediately upon arriving at the Centre were not very clear. Photo-identification, taking of digital fingerprints and filling in of information sheets are carried out as soon as the migrants get off the bus that takes them from the landing dock to the camp, whatever time they arrive and whatever their condition. Therefore, they want to know if it is at all possible to receive correct and complete information on their rights in such circumstances.
In fact, the lack of legal information on rights and obligations is reflected in the sometimes confused or incomplete information in the possession of migrants. Some thought they could reach other European countries to begin the asylum procedures and to be reunited with family and friends; others were not aware of the possibility of being relocated through the quota mechanism launched last summer by the European Union and finally, some of them showed an overt lack of confidence and trust in the Italian and European institutions.

During these Spring days, the island of Lampedusa has once again become the stage for problems associated with the reception policies and it is understandable that the management of these recent events also worries the people of Lampedusa who are preparing for the summer season. The voice of the migrants is accompanied by banners, probably made with disposable sheets provided by the centre, which read: “We are refugees, we need freedom” or “We want to get out of this prison.” Mediterranean Hope in Lampedusa is closely following the events of these days and can testify to the determination of these people who want their rights to be respected, questioning a Europe that is still looking for practical and appropriate responses.