The Emotion of Justice 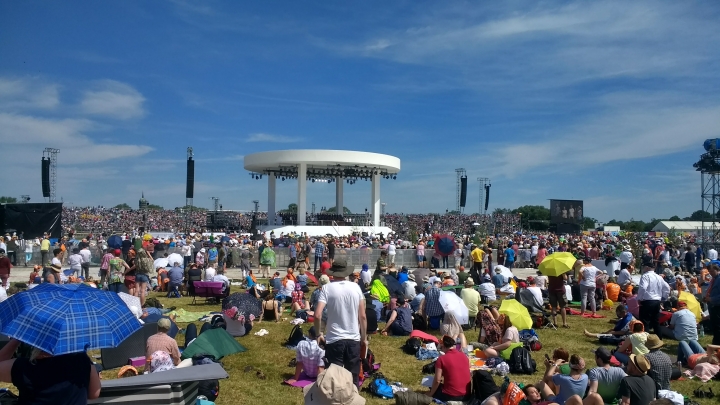 Rome (NEV),May 31, 2017 – The “Lo sguardo dalle frontiere” editorial is written by the operators of Mediterranean Hope (MH), the migration project promoted by the Federation of Protestant Churches in Italy (FCEI). This week story is from Berlin and Wittenberg because MH took part in the German Protestant Kirchentag.
I laid my eyes on the multitude in front of me. In Wittenberg, under an unexpected bright sun, 120,000 people gathered for the closing worship of the Kirchentag 2017 for the 500th anniversary of the Reformation, which took place in Berlin from 24 to 28 May.
The celebration began at noon, but before starting, it was hold a short presentation of Mediterranean Hope and SOS Méditeranée (NGO group involved in recovering and rescuing migrants at sea that together with MH received the offerings gathered during the worship service).

As getting on that huge stage I did not feel nervous. I had a minute to tell something to this people who gathered to pray, but also to share the vision of a world that as Protestant churches we want to build together. I took a breath, then, visibly moved, I started talking about MH project, Human Corridors and the many who perished in the Mediterranean sea and along the frontiers. After three years working in Lampedusa, I was still excited about telling of our work. I hope that my brief message has reached the thousands of people I had in front of me and all those who attended from home.

The presence of Mediterranean Hope at Kirchentag was valuable and significant. In addition to the closing worship, we had the opportunity to present the project at two conferences in Berlin one of which was attended by a widely international audience and representative of many institutions. The main objective was certainly to illustrate what has been happening in Lampedusa and in the Mediterranean sea. But, above all the aim was to give a significant account about Humanitarian Corridors. Even though we are conscious that they are not enough, Human Corridors can be an alternative pattern to face the ongoing migration crisis. About a year and a half ago, the first Humanitarian Corridors were opened and we brought 800 people to Italy by a safe and legal way: individuals, families, who now live a new start, far from wars, violations and deprivations. I see the children and the kids coming back from school with their backpacks, happy to have achieved their greatest wish: to go back among the desks, with their peers, without bombs and away from precarious refugee camps. The dream of an Ordinary life that comes true.
To talk about Humanitarian Corridors during an event such as Kirchentag means persisting and hoping that such a model can be replicated in other European countries. France has just started the same protocol and in Germany, a country playing a central role in the European scenario, they are trying to activate Humanitarian Corridors. The success of a joint initiative in these three countries would certainly be a strong political signal.
The emotion I felt when talking about our work was the feeling of those who had the opportunity to see in Lampedusa the migrants: fragile people but determined in a future of hope. The emotion was that of a young evangelist who got the chance to realise, from a small Protestant church, a project that seemed unworkable. The emotion was that one of those who do not stop when facing xenophobic fears, but try to realise a vision of common justice.
As getting on the stage thinking I was not nervous, I knew that in Lampedusa, the Mediterranean Hope team together with the volunteers was getting ready to welcome those who were landing after a long rescue at sea, knowing that not everyone could have the chance to survive. And at the same time, I thought about those families who have been packing their bags, deciding what to bring of their personal history and their land to the country that would welcome them through the Humanitarian Corridors. Perhaps, a minute was not enough to tell this feeling to 120,000 people but I hope that the work of these years, made up of collaboration with sisters churches and institutions, will lead us to the next Kirchentag during which we would say that Germany has also opened up to the Human Corridors .