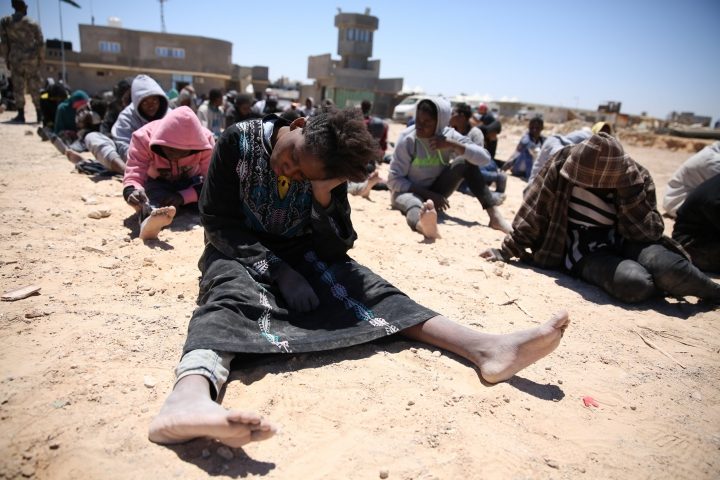 by Irene Cocco, volunteer of Mediterranean Hope at the Observatory of Lampedusa

Our articles talk about what is happening on this side and that side of the barbed wire barriers, from the endless stretches of deserts, the check-points, rocks at the gates of Africa, and also from the seas that continue to swallow human lives.

Rome (NEV), 14 June 2017 – The “Lo sguardo dalle frontiere” editorial is written by the operators of Mediterranean Hope (MH), the migration project promoted by the Federation of Protestant Churches in Italy (FCEI). This week’s story comes from the Observatory of Lampedusa

During the internet point service offered by the Mediterranean Hope migration project of the Federation of Protestant Churches in Italy (FCEI) to many migrants passing through Lampedusa, a relationship of trust is often established between a MH volunteer and the young men coming from the sea, such that someone finds the courage to tell their story. This is the case with Mike, a Cameroon boy who wanted to share his story with us:
“I left Cameroon for Nigeria. I crossed the desert, passing through Agadez, convinced that I was going to Algeria – at least that is what they told us – instead they brought us to Libya to be sold. As soon as we arrived, we were imprisoned and we remained there for three months and two weeks.

Every day we were subjected to all kinds of torture. They beat us with sticks, they made us take our clothes off, they threw us on the ground and wet us, and then they gave us an electrical shock. The reason? Money. They asked me for five hundred francs [Cameroonian francs, equivalent to about 760 euros, editor’s note], they even beat us while we were talking to our families on the phone. The reason? To make us scream so that our pain would be heard directly by our loved ones, who were forced to pay in order to save us.

I only managed to call home once, because my family had no money.

Outside there was a high barrier where the Gambians were detained in another prison. Instead, I was in the prison controlled by Nigerians, with other Cameroons, and only three of us could speak French, so they beat us every time we did not speak English. There were about one hundred and thirty people in one large room, we were always in the dark. I could not sleep because I had lots of thoughts racing through my mind.

One day I recognised the man who had taken us to Libya, as soon as the door opened and I saw the light, I went out. I took a breath and threw myself at his feet, pleading with him to help us. He asked me how I was and why I still hadn’t paid. I told him that my family did not have any money and that I would die in this place if I remained. He took me and my two Cameroonian colleagues with him and let us go free. Later I found out that he was also from Cameroon and was the contact between the Libyans and my family.

The man took me to his home and as soon as I regained my strength, I started to work. I washed cars, but in another city because I didn’t want the traffickers to recognise me. I would have had the same problem if I had gone back to my country. After four months, the man who had sold me and then took me back, introduced a Libyan man to me, who one night, at about three or four o’clock, brought me to the coast and made me get into a dinghy. I was attacked several times and robbed of all the money I had earned. There were about one hundred and fifteen people without nothing left and so we departed. The journey lasted six hours until an Italian ship rescued us in international waters.

Now I am starting to think straight again. I think of my daughter. I want to hug her, to see her grow and play. I can’t think of hearing her on the phone and not being able to have direct contact with her. This hurts me, but now I am safe and I have to go back to being who I was. I have to start playing sports. I have to start walking. I have to stop thinking about Libya, where one day lasted a month and the beatings were daily, like the morning coffee here in Italy.”