“Living and Witnessing the Border”. International Conference in Palermo and Lampedusa 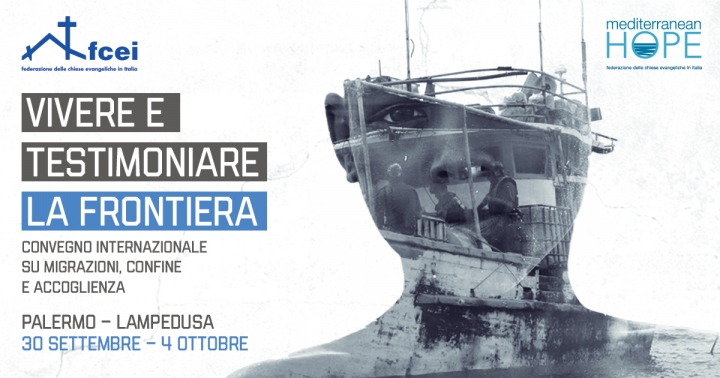 Rome (NEV), September 26, 2017 – More than one hundred participants from various countries are expected to attend the International Conference organized by the Federation of Protestant churches in Italy (FCEI) starting from September 30 in Palermo (Sicily), with the title: “Living and witnessing the border”. “The international gathering to be held in Palermo and Lampedusa is meant to be a moment in which we collect the fruits of the work and reflection carried out, together with our partners, in Italy and abroad in the last three years, about borders, reception and integration”, explains Marta Bernardini from FCEI’s Refugees and Migrants Program “Mediterranean Hope”(MH).

The first two days – to be held in Palermo at the “La Noce” Centre of the Waldensian Diaconia on September 30 and October 1st – are addressed especially to those who work with migrants within the churches, from the Mediterranean area to the border between USA and Mexico. Also will there be an opportunity to talk about the “Humanitarian Corridors” Project, an ecumenical “good practice” put in place by FCEI, the Waldensian Board and the Community of Sant’Egidio that guarantees safe and legal passages to Syrian refugees from Lebanon. Pastor Maria Bonafede, from the FCEI Council, and Cesare Zucconi, general secretary from Sant’Egidio, among others, will be giving their contribution.

On October 2nd the meeting foresees a special event at the community hall of “Villa Niscemi”, which will be opened by the Mayor of Palermo, Leoluca Orlando, and the Councilor to Social Policies, Giuseppe Mattina, followed by the greetings from pastor Luca Maria Negro, FCEI president, and from pastor Eugenio Bernardini, moderator of the Waldensian Board.

“Migrations, Human Rights and Good Practices” is the title of the third session of the conference, to be held in the late afternoon of October 2nd. Speakers will be the general secretary of the Protestant French Federation for Mutual Help (FEP), Jean Fontanieu; the general secretary of the Churches’ Commission for Migrants Europe (CCME), Doris Peschke; the bishop of Agrigento and President of the Italian Caritas, Msgr. Francesco Montenegro; and Paolo Naso, coordinator of the “Mediterranean Hope” project.

On the tiny isle, located between Sicily and the North African shores, FCEI’s “Mediterranean Hope” Project is running an Observatory on Mediterranean migrations, opened a few months after the tragedy of October 3rd 2013, when 368 migrants drowned just in front of Lampedusa. This October 3rd at 6 PM, FCEI/Mediterranean Hope, together with the Catholic Parrish of Lampedusa, has organized an ecumenical ceremony in remembrance of all those who lost their lives “on the borders”.

Program “Living and Witnessing the Border”