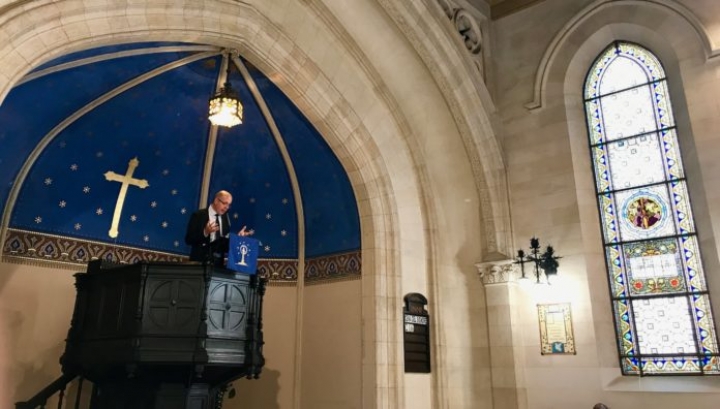 Rome (NEV) 6 October, 2017 – “God opens the breach, but he does it not alone. He invites his people to follow him in an active way”, said pastor Luca Maria Negro, president of the Federation of Protestant Churches in Italy (FCEI), during his sermon on Micah (2:12-13) in the Waldensian Church of Palermo last Sunday, October 1st. The worship was attended not only by the multicultural congregation of Palermo lead by pastor Peter Ciaccio, by also by the participants of the international Conference “Living and Witnessing the Border”, promoted by the Mediterranean Hope-Refugees and Migrants Program of FCEI. The FCEI president in his sermon invited the people of God to tackle immobilism. “This should be the action of any believer, as we are called to build bridges, to unlock closed doors and break open the way”, concluded Negro.

From Micah 2:
12 “I will surely gather all of you, Jacob;
I will surely bring together the remnant of Israel.
I will bring them together like sheep in a pen,
like a flock in its pasture;
the place will throng with people.
13 The One who breaks open the way will go up before them;
they will break through the gate and go out.
Their King will pass through before them,
the Lord at their head.” (New Revised Standard Version)

Following the summary of the sermon:

It is not clear whether this oracle refers to the time of prophet Micah (a contemporary of Isaiah) or reflects the period of the Babylonian exile. Anyhow, what we find here is an almost unique image of God: God as “The One who breaks open the way” or “opens the breach”.

God breaks open the way when Israel is imprisoned, blocked by impenetrable walls. He does not only open the breach, but invites his people to follow him in an active way: He is going up before them, but they also have to “break through the gate and go out”.

We made several times this experience of a God who opens a breach and calls his people to break open the way. In this year 2017, as we celebrate the Jubilee of the Reformation, we might recognize in Martin Luther an example of this “breaking open the way”.

What about our time? I would like to make three examples.

The first has to do with the attitude of our Italian Protestant Churches towards gay and lesbian people, opening the way to the blessing of same-sex couples even when in Italy there was no law recognizing homosexual relations. The decision to allow the blessing of same-sex couples was quite controversial, but couldn’t it be seen as “opening the breach”, giving a prophetic sign to the Italian society in front of the denial of civil rights to gay and lesbian people?

The second example has to do with Eucharistic hospitality. In all countries there are thousands of inter-confessional couples: they share everyday’s life but are not allowed to share in the Eucharist. When I lived in Turin (Northern Italy) I was part of an ecumenical group that decided to systematically break the church laws, practicing Eucharistic hospitality in different churches. This group is called “Breaking the bread together”, but couldn’t it be seen as a manner to break open the way beyond the churches’ stiffness and lack of pastoral sensitivity?

The third example is the humanitarian corridors: an ecumenical project, initiated in Italy by the Federation of Protestant Churches, the Waldensian Board and the Catholic Community of Sant’Egidio. Through this project, we were able to bring safely to Italy almost 1,000 refugees. It is a significant example of how believers in a God who opens breaches can work together to break open the way, to show that building walls are not the solution to the problem of migrations and that it is possible to avoid our Mediterranean Sea to become a mass grave.

Each time walls grow higher and gates become impenetrable, as believers in a God who opens breaches, we are called to build bridges, to unlock closed doors and break open the way.