A dignified arrival at Fiumicino for more Syrians fleeing Lebanon 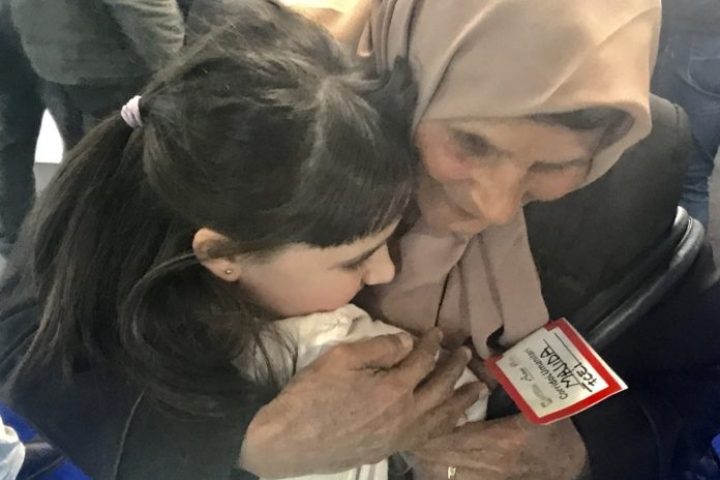 Rome, 27th March 2018 (NEV/CS14) – Majida is seven years old.  Just like the war in Syria.  And it’s for that reason that she’d never met her grandmother.  However, today, at Fiumicino airport, thanks to the current humanitarian corridor programme – through which particularly vulnerable Syrian refugees arrive safely and legally in Italy from Lebanon, – Majida, who was beside herself with excitement, finally got to meet her grandmother.  Her dad, a Syrian who has lived in Italy for some years, commented, “It’s the ‘two Majida hug,’” a reference to the fact that the child bears her paternal grandmother’s name.  “The same day that Majida (senior) left her home in Idlib to flee for Lebanon – a home which the bombs had spared until that point – a missile landed right on it,” explains Haji, the father and son of the newly united Majidas.

The old lady will come to live with them, not far from Rome, where she will also meet the baby of the Italo-Syrian family, fifteen month old Aisha.  Haji’s brothers, on the other hand, fled to Turkey, whilst a young nephew is in Germany, having got there via the Balkan route.

Another 41 joined “Majida senior”, today at Fiumicino, a third of whom were children.  Tomorrow another 42 are due to arrive from Beirut.  Also present at Fiumicino today were two other families who came to Italy through the original humanitarian corridor programme, and were there to welcome and embrace their relatives.  The new arrivals, in keeping with the ethos of “dispersed reception”, will be  settled throughout Italy, from Piedmont to Lombardy, Liguria to Lazio and Sardinia to Sicily, where they will be received into accommodation managed by the organisations involved – the Federation of Protestant Churches in Italy (FCEI), the Tavola Valdese and Comunità di Sant’Egidio – and their partners.

“We are here because we need to be alongside those who are suffering and with those who are seeking to have human rights upheld, because it is possible to open legal humanitarian channels which are safe for refugees and safe for Italians.  We are here because it is right,” Paolo Naso, co-ordinator of the FCEI’s Refugee and Migrant Programme, “Mediterranean Hope”, affirmed during the press conference.  Naso reminded those present that we are only a few days from the fiftieth anniversary of the assassination of Baptist pastor Martin Luther King. Paraphrasing the words of the African American civil rights champion he added: “Cowardice asks the question: is it safe?  Politics asks: is it popular?  But only conscience asks: Is it right? … and we are here today because it is right.”

The president of Sant’Egidio, Marco Impagliazzo reminded those present that the humanitarian corridors are “corridors of peace”, inviting those who are starting down the path of integration “to work with us for peace, the only guarantee of rights for all.”  The vice-minister for Foreign Affairs, Mario Giro, who defined the war in Syria as “the scandal of the century”, said: “Our enemy is war.  [There are] no nationalities, nor ethnic groups, just men and women who need to oppose war which is at the root of everything that is evil”.  Vice-prefect Donatella Candura from the Ministry of the Internal Affairs, singled out the exceptional work which has been undertaken by the organisations involved and the forces of order, calling it a “virtuous synergy”.

The humanitarian corridors model, begun in Italy in 2016 in collaboration with the Ministers of Internal and Foreign Affairs, is now being replicated in other European countries.  Last Friday, 23rd March, fifteen more people arrived in Paris, bringing to 107 the number of refugees welcomed to France via the ecumenical project promoted by Sant’Egidio and the Protestant churches.  Likewise, 26 people arrived yesterday in Brussels, welcomed by an inter-faith group also involving the Jewish and Muslim communities.