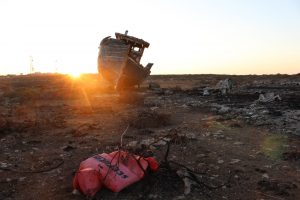 The “Lo sguardo dalle frontiere” (A Look from the Border) editorial is written by operators of Mediterranean Hope (MH), the migrant project of the Federation of Protestant Churches in Italy (FCEI). This week’s “Look” comes from Elisa Biason, a volunteer in Lampedusa, who returned to the island one year after her previous experience with MH

The churchyard was given a voice. It caught the attention of many people who strolled along Via Roma and who gradually joined those who were already on the steps of the church. The lights of the lanterns lit by the Forum Lampedusa Solidale reinforced the meaning of those presences: to interrupt the absurd attempts at blocking the right to land in a safe port and the denial to conclude the rescue operations. 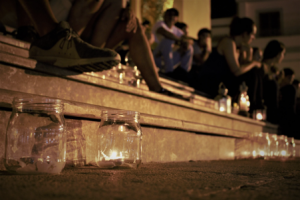 The lights of the lanterns have been lit for more than two weeks. This was how long the 160 people, including 32 children, spent on the Open Arms ship before being allowed to disembark.

As I look back on those days I remember the succession of events. The continuous updates on the health and situation of those on board. The concern for the collective cries and fear. This was followed by requests to disembark, which was refused by Malta and Italy. 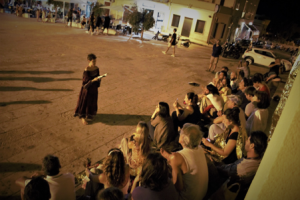 I remember the autonomous landings that took place despite the vetoes from the then Minister of the Interior, Matteo Salvini. Without clamour, they took on the desired meaning for everyone: salvation for those who, after days at sea without water or food, with their skin cooked by the sun and salt, flowed out onto the hot asphalt of the commercial port. They were alive. I remember the little girl crying for her brother who fell from the boat, the three naked children and the exhausted bodies. A year after that churchyard and the sense of that constant permanence, the silence seems to be the only sound present and it doesn’t make the nights any calmer. It brings us back to a torpor of deep and very serious injustices, which should come and grab us by the feet while we sleep at night in our warm beds. This silence falls on those in the Libyan camps, on those from Libya who leave and are not rescued if they are in international waters. It covers and obscures, but cannot be erased because everyone knows what is going on and everyone is involved. This should unsettle us, it should make us think, see and talk about what is happening: the inability to help with the landings due to the COVID-19 emergency, the uncertainty about the number of arrivals and the dangerous situation faced by people who are at sea right now. People sighted and not rescued.

I remember when the medical team disembarked from the Open Arms and I remember meeting two women, Angela and Hortensie. After greeting them with a smile, they both told me how happy they were to finally be on dry land. We introduced ourselves. Angela took my name as a sign of good luck because her grandmother was also called Elisa. For Hortensie, things went a bit differently: the big burn on her leg had worsened significantly and her eyes were extremely sensitive, any source of light caused her suffering. When I approached her, I noticed that her face was protected by a thermal blanket. I thought she was cold. She explained to me that she was protecting her eyes from the streetlight. Given her precarious condition, we went straight to the clinic by ambulance. On the way there and while waiting she told me that she had been locked by her owner for about six months in a completely dark room. They abused her and kept her locked up in the darkness. Detention damaged her eyesight. Just before she was sold, her owner burned her body by pouring acid on her.

A year later the situation hasn’t changed. Despite public knowledge and reports of what is happening in Libya, measures to refinance missions abroad have been approved. A budget of 58 million euros has been allocated to Libya, of which 10 million will go to the bilateral coastguard assistance mission, a total of 3 million more than last year. It goes without saying that this fosters economic relations with areas where crimes against humanity, ill-treatment and mass violence of migrants have been verified, in a country that does not recognise the 1951 Geneva Convention on Refugees. 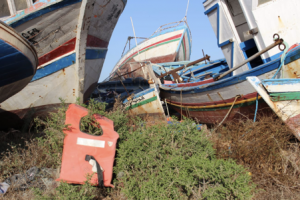 European policy is heading in the same direction. According to the International Organisation for Migration (IOM), since the beginning of the year, 5,475 people have been intercepted by the so-called Libyan coastguard and brought back to no-man’s-land. In this phase of silence, there are no NGOs at sea because the ships are blocked in various ways, reports of corpses or boats with people on board who are in difficulty continue to arrive and autonomous landings continue to take place. At this point, we wonder how long this night of immobilising silence will last. Unfortunately, the night is not over, and the day has not yet begun. We still have to question, insist and continue to insist infinitely so that this transforms into a collective awareness and a renewed political choice that focuses on people. The landings continue in Lampedusa and the means used to reach the island, accumulated in the boat cemeteries, were set on fire. 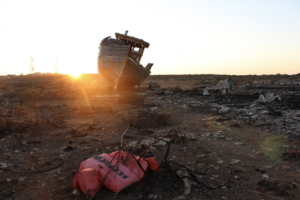 These are the fires that currently illuminate the island. There are still questions to be asked and we must demand for the opening of legal paths to get out of the Libyan camps. The humanitarian corridors must be opened.