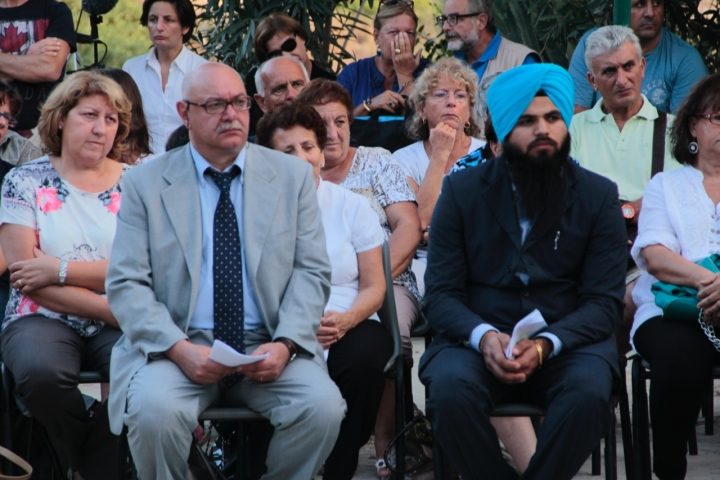 Rome (NEV), 11 February 2015 – The opening of a humanitarian channel to accept refugees is a matter of conscience. The death of 300 people in the Channel of Sicily was confirmed the day after the tragedy by the President of the Federation of Protestant Churches in Italy (FCEI), Pastor Massimo Aquilante, on his return from Morocco, one of the North African countries most affected by the transit of refugees. The mission, carried out together with representatives of the Community of Sant’Egidio, is part of the Mediterranean Hope program, a FCEI initiative consisting of various structures: an Observatory on Mediterranean migration operating steadily in Lampedusa; a House of Cultures (Casa delle Culture) in Scicli (Ragusa, Sicily) used as an intercultural space and reception centre for the vulnerable (unaccompanied minors, women); and an office for the relocation of refugees and asylum seekers operating in Rome.

Pastor Aquilante, why did you visit Morocco? My answer comes within a couple of hours to yet another intolerable massacre, a massacre that could have been avoided. Our consciousness as Protestants and Europeans rebels against the idea of a wall between Europe and North Africa, where thousands of people die each year. We are facing a global phenomenon involving migrant flows that from central Africa arrive in North Africa, and then head towards Europe. People are fleeing because governments collapse, civil wars break out, desertification advances, Christians are persecuted and churches are burned down. Faced with these tragedies and with the weight of these situations, we have to break the scheme that opposes Europe, which experiences immigration, and Africa, which generates it. It is much more complicated because some countries such as Morocco have themselves become countries of immigration, and laws are being made to recognise them as such. We went to Morocco to better understand these dynamics, but mainly to establish and strengthen the collaboration with partner churches, associations and institutions. Together we hope to play an even more effective role in defending human rights, protecting migrants and asylum seekers, and developing suitable reception and integration policies. What affected you the most during your visit? The metal nets that cut through the beaches, and that run between Morocco and the Spanish enclave of Ceuta: an unnatural border, along which hundreds of people have died. Sub-Saharan children living in the forests near the northern border of Morocco and who hope “in some way” to cross it, even risking their lives. Children who, after crossing the border of Ceuta, live in a reception centre where they have a computer and gyms and from which they can enter and exit as they please. The question is always the same: what can actually be done? The answer can be divided into two parts. Sustainable integration and reception policies are needed based on humanitarian principles. Closing the frontiers, suspending Mare Nostrum, transforming the reception centres into detention centres, and leaving Italy on its own to face the challenge of Mediterranean migrations is not worthy of the European culture and tradition based on laws that conceived universal human rights and on principles of solidarity. The “immigration” deaths in the Mediterranean now number thousands and this figure weighs like a ton of bricks on Europe’s conscience. Our proposal is simple: we need to open a humanitarian channel that allows refugees and asylum seekers to obtain an entry visa into Europe. We are not asking for an unsustainable opening of the frontiers to all kinds of migration, but simply a device to protect the rights of asylum seekers. What feedback have you received? In Morocco, positive and encouraging. We are facing a problem of exceptional magnitude that has no easy and magical solution that is good for all types of migrants. The concept of humanitarian corridors is proposed for people fleeing persecution, war and torture and who therefore are entitled to be recognised as refugees. This proposal is compatible with others that can address the problems of other migrant segments. We have chosen to focus on a group of people who are particularly exposed and vulnerable. We now have to advance this proposal in Italy and Europe, dialoguing with the competent authorities and trying to raise awareness. We are talking about a phenomenon that is too serious and important to be able to settle with a few racist, cynical barroom jokes. It involves informing and educating people, which is what we are also trying to do through the Observatory of Lampedusa. An ecumenical action? Yes. The Moroccan delegation consisted of Protestants and Catholics active in the Community of Sant’Egidio. This partnership did not come about by chance, but is the result of years of meetings, collaborations and even common prayers. We are united by Lampedusa and what this island represents in today’s debate on migration. And together we believe we can experience an active ecumenism that will bear tangible and commendable fruits. It is not only a humanitarian action for us: it is the answer to a specific vocation inherent to all Christians.