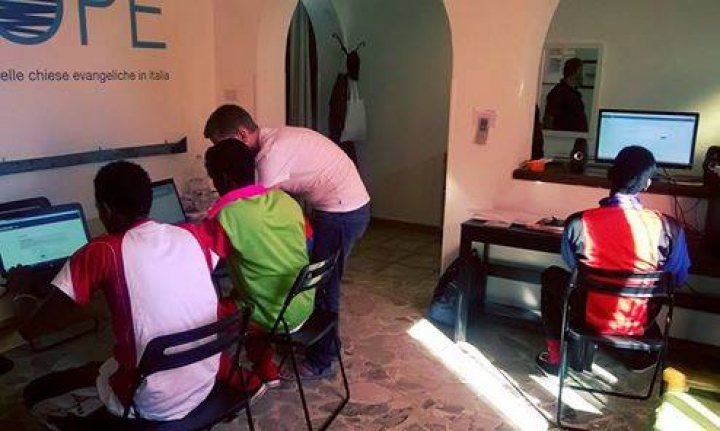 by Marta Bernardini and Francesco Piobbichi. (NEV) – 1 July 2015 – Summers in Lampedusa pass quickly and intensely. At the end of the winter, life changes in Lampedusa. Everything accelerates. Summer is the season of tourism and for us it means more occasions to open a dialogue. In addition to video makers, designers, photographers and researchers, tourists arrive. And, they change the atmosphere on the island. Tourists often stop at the pier, disoriented, staring at us while we bring water and biscuits to immigrants who have just landed. Their disorientation is not due to what they witness here, but to the distance between what they saw on TV and the actual reality in Lampedusa. A family from Reggio Emilia recently waited for us at the Molo Favarolo, after the last arrival. They discretely asked us for information about the migrants’ situation. We told them about our activities and about the stories, we have seen and heard on an island that alone copes with a situation that Europe cannot manage. The family kept on asking question, trying to understand the situation. We told them that many of the immigrants flee from Africa since we left those lands hungry and indebted after exploiting their resources. They were puzzled when we told them that over thirty years many African countries had paid 12 times the amount of the heinous IMF debt. And, from 1991 until now, there has been a war every two years and a half in Africa, the Mediterranean region and the Middle East. We parted. They went to see the boats brought back to shore, near the football field. Who knows what they will say to their loved ones, and to their friends once back home. I wonder if they would still believe in the biased information spread by TVs. It would be very important for Italians to know about Lampedusa. Not only because the island is dramatically beautiful but also because the fear arisen by the media would be erased by contemplating this wonderful place. It is not easy to explain what the border means, its divisive logic, why people flee, and finally what happens to those who are taking the sea. This would take time and we do not have it, because of our activities on a day like today. This morning, some American tourists stepped in our office. They craved for news and wanted to better understand the migrant’s crisis. We talked for hours. We used Francis’ pictures – he is one of the MH’s operators – to better communicate with them, to illustrate our point of view, to explain the humanitarian corridors projects, the idea of deconstructing the frontier. We told them that here in Europe we  learnt the border logic from the U.S: the Mexican frontier has the same barbed wire of Ceuta and Melilla. They asked many questions and they were able to leave with some more information. While we parted, two Somali boys stepped in and asked us, as it often happens, to change some dollars. The American tourists accepted to change their dollars, chatted in English with the Somali boys, laughing together on their way back to the village. Here in Lampedusa we are all migrants after all: those who come to relax and those in search of a better world. These early July days in Lampedusa are very intense: everything happens fast and we need to work fast. Immigrants who can get out for a few hours from the first aid and reception centre come to the MH office to use the internet. They say that their dream is to reach Germany, or elsewhere.  They show us their pictures and those of their young wives. These few hours at the MH office give them a breath of fresh air: they listen to music on You tube, they watch the matches of Manchester United. They are poor but connected. It is worth pondering on this metaphor: a poor continent believes that on the other side there is a promised land. Then, its dream shatters on Melilla barbed wire or on the rocks of Ventimiglia. Those who get to the border immediately understand that it will not be easy. The reception system treats them like mere numbers, with a few smiles and many orders. They will have to start again. Even the social media reset. They cannot even login in to Facebook: they need to insert a new password because they are now on a different continent. Passwords are sent by text messages and they do not have their mobile phones. We give them our phones and they are happy when they see we also use Viber. They finally find a solution: to connect by entering the MH’s Wi-Fi. From here, they can call home after more than two months. “Hi Mum, we are in Lampedusa”. Screams of joy fill the room. “Here it is, Lampedusa, always worried and anxious, frightened to lose its tourists, exposed to the wind and to the world.” This is what we recently wrote on our FB page after a landing of a hundred refugees. A new followed two hour later. We had just the time for a quick meal, then back to the pier, with a little food and water to say: “Welcome, you are now in Lampedusa! Good Luck”. Sure, these people really need a little fortune, in this rich continent of fear and injustice their journey to North has just begun.