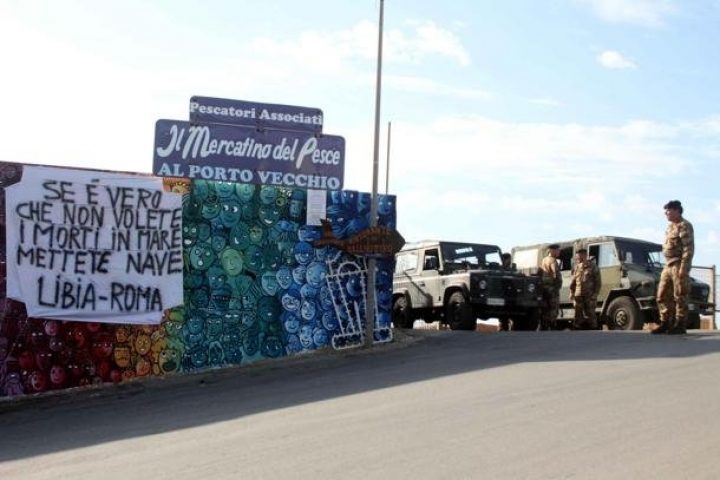 Given the general atmosphere of sultriness, crisis and uncertainty, I was thinking of combating the glumness with a simple story that has a happy ending. And I had found a perfect (though very personal) one: the adventure of my “bitch” Sofia, lost and then found after about an hour with the help of a number of good people. Moreover, I had already started work on digging up every detail worthy of note from my recent memories so as to write it all down later on. But then I went to Lampedusa, and all that lightheartedness vanished.

I have always felt admiration and a sort of envy for doctors, nurses, mediators, activists, social workers or volunteers who are fortunate enough to make eye contact, exchange shy smiles, offer a glass of water or a blanket to a survivor from the sea. It happened in our city only a year ago when a merchant ship accompanied some refugees to our port, saving them from the waves of the Mediterranean and leaving them at the sea fair. Some, separated by time who were surprised by this extraordinary experience and instant empathy, per contra to who they were themselves followed the refugees and told me that they had never before thought that those people “were so much like us.” And they advise all those who fill their mouths, often with words resulting from ignorance and hatred on these issues, that “they should spend a day on the dock to welcome them, and only then will they understand.” Well maybe some may understand it, but for the others more stubbornly insensitive, this welcoming cure might not be enough. Even in Lampedusa, where that miracle of empathy is repeated almost every day, many still walk free. The island, contrary to the image suggested by the media, is in no way “invaded” by the refugees that “disembark” or better are disembarked by the “saviors” of the Coast Guard and then initially locked up in a hurry in a rescue reception center, which cannot even be seen, and then transferred by a ship off the island with absolute discretion, far from the eyes of tourists and almost always at night. Once a disappointed tourist told me that he had not seen any “black, nor even a vu’ cumprà” street seller. Last night some friends shared their good fortune with me on the docks of the island: they gave me plastic cups, water bottles and juices purchased with their money and they made me feel a part, as a participant, of this exceptional experience and a recipient of undeserved gratitude. Everything was perfect like a summer sunset. They had all arrived alive, exhausted but healthy, with many minors: two babies were bundled up in their mothers’ arms, and one girl was in her ninth month of pregnancy. Everyone expressed their gratitude, even those who did not have voice or strength to do so, thanked us with their eloquent glances. Volunteers were moving in perfect synergy with specific, effective and long-proven actions. There were those who carried water, those who gave drinks, those who collected the used glasses that the refugees tried not to throw on the ground, and those who were handing out cigarettes and words of comfort, of which the first is always – “Welcome!” It was all almost perfect, you could almost forget for a moment about the war and torture that they witnessed. But then there are those ever insensitive people. Those, who display batons, badges, arrogance and rank. Those who use the bureaucracy as stumbling blocks and uniforms as abuse. Incapable of enjoying the perfection of the moment, they have to spoil it, shouting orders and insults, showing useless muscles, placing silly bans, such as on the provision of water to the exhausted, or hampering women no welcome and rescue. This fills me with the same helpless rage that I experienced one night, fourteen years ago in front of the Diaz school. To find peace, I just focus on Paola, Alberto, Francesco, Yadira and Lillo who, regardless of the ban, continue to offer a drink to the refugees, because they teach me that denying water is failure to offer assistance, something which we may be arrested for as well.