Not Just A Memorial 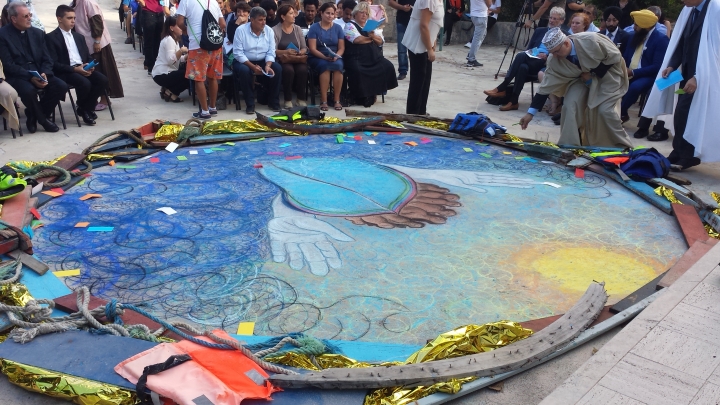 Giusy has coloured the pavement in front of the church of the Sanctuary of Lampedusa. After hours of patient work the picture that was prepared also by other citizens, revealed a boat that opens a barbed wired sea with two hands to protect it. This huge picture will then be surrounded with some pieces taken from the boats that landed to Lampedusa with on top life jackets and blankets.

Around this artwork, conceived as a memorial of the people who perished on October 3rd 2013, were celebrated our interfaith ceremony “Commemorations between sea and sky”. The location was one of the first in the Mediterranean sea that was characterised by the coexistence between different faiths. Lampedusa island of salvation, in which one can listen to the stories of freed slaves and the Virgin that protect them, and generations of political prisoners. Lampedusa, increasingly militarised border which is crossed by the whole world, it seems to find its identity through this site. Thus, the ceremony of October 3rd becomes a message to all of humanity, a message of tolerance, respect and reciprocity, peace and brotherhood. Many people spoke, prayed and quoted the New Testament, the Koran, or other religious texts. In addition, the poems of Erri De Luca were read. Even the relatives of the victims and the survivors of that shipwreck spoke and thanked those who on that day saved them from the sea. They also remembered the victims of the politics set out by “fortress Europe”. Many from Lampedusa took part in the ceremony and many of them have worked for its success. After all, who better than them to make this day a commitment for the community. Who better than the rescuers and other unknown support giver to tolerate the weight of this memory and make it a permanent warning to our leaders. Indeed, does this ceremony, which has come a symbolic journey through the grottos of the Sanctuary of “Porto Salvo”, inside which the Hermit of Lampedusa prayed with the Koran or the Gospel refusing to take part in the war of religion, represent a message that goes beyond a mere memorial? Who knows what has happened to these stones beaten by the weaves, when, after hundreds of years, these words from the past were pronounced. We wonder why a place like this has not been named a World Heritage site, yet. October 3rd at the Sanctuary of Porto Salvo is much more intense than we think, because Lampedusa through the death of these 368 innocent people has rediscovered its deepest soul. Lampedusa has understood that it has always been the island of salvation. And, as if the ceremony had come into harmony with the hidden roots of the island, becoming at the same time a tool to remember the past and enrich the present of this great and terrible world, in which borders and barbed wire are the scars produced in a land that belongs to everyone. And it was a terrible thing for us to know that just a few hundred meters away from the ceremony there were other people who landed and were immediately separated because the reception centre become an hotspot. Even more noticeable was the different atmosphere between this beautiful and moving ceremony of October 3rd and the demonstration made by the immigrants that was held a few hours later, during which the people locked inside the centre pleading for freedom of movement and the end of what seems to them an unjustified detention. This stop after being rescued seemed a false imprisonment.