The borders’ doctor and the right to health 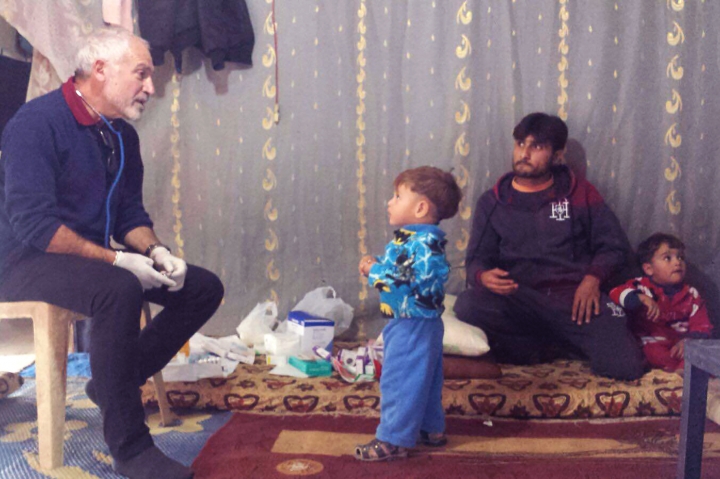 Beirut, Lebanon, 13 April 2016 – “The most difficult thing is to solve the health problems of people who have no money in a country where healthcare is managed privately.” These are the words of Luciano Griso, an internist specialised in haematology and psychotherapy, and a member of the “Humanitarian Corridors” team, who has been working in Lebanon since January for the ecumenical project of the Federation of Protestant Churches in Italy (FCEI) and the Community of Sant’Egidio. “Seeing people suffer because they have no money to buy medicine or go to hospital is the hardest thing to deal with,” he adds.
Every day he visits women, men and children with very serious health conditions. He is in charge of determining the level of vulnerability of refugees – mainly Syrians – who have taken refuge in Lebanon, and who, if they obtain a “humanitarian visa” would be able to reach Italy legally and safely. With patience and professionalism, he tries to examine as many cases as possible, which have been reported by the local network of non-governmental associations and organisations operating in the “country of the cedars”.

He has a huge responsibility that irreversibly marks the fate of people. In fact, many of them were included in the first list of people arriving in Italy. Like Falak, the little girl from Homs suffering from retinoblastoma, a rare tumour of the retina, which is curable, but not in Beirut where healthcare is private and treatment is impossible without health insurance. Or like Diya, the young boy whose leg was amputated as a result of a mortar explosion in front of his home in Homs. With the humanitarian corridors these two children were able to access healthcare in Italy: Falak at the hospital of Bambin Gesù in Rome and Diya at the “Bimbingamba” association, the RTM orthopaedic centre in Budrio, near Bologna, which donated a prosthesis to the young Syrian.

Numerous cases could be treated in Lebanon with a simple hospital stay, but the costs are excessively high. This is the case, for example, of a Syrian Kurdish man in need of chemotherapy; the estimated costs calculated by the American University Hospital are equal to that of buying a house.

Unfortunately, not all cases are successful. One of the last people examined was a young woman of Aleppo, the mother of two children, lying on a mat unable to move due to violent back pain caused by tumour metastases to the spine. “She cannot travel to a specialised centre, she cannot get adequate care because it costs too much. She has been abandoned to her fate,” says Griso.
However, this situation not only affects Syrians – nearly 1.5 million in Lebanon, according to the latest estimates by the United National Agency for Refugees, updated in June 2015 – but also the Lebanese themselves who must pay large amounts of money to get health insurance.

“It is hard to accept this situation when you come from a country where the right to health is recognised to all citizens regardless of income,” concludes Griso.