“No fingerprints!” The protest of Eritreans in Lampedusa 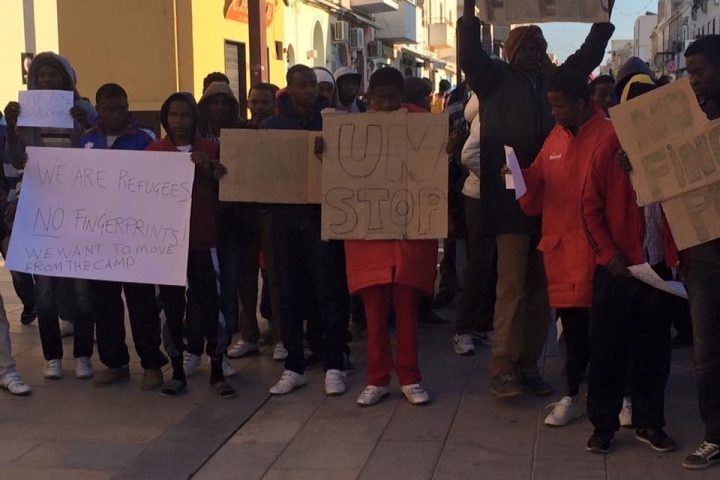 Lampedusa, Agrigento, 13 January 2016 – In recent weeks, numerous cries of “No fingerprints!” have echoed through the streets of Lampedusa. These cries come from two hundred Eritreans who have been detained on the island since December. The young men refuse to have their digital fingerprints taken by the forensic police operating in the first European hotspot, because they oppose the objectifying mechanisms of the European relocation system. At first glance, their protest might appear paradoxical. Many people in the rest of Italy have commented emphasising the impertinence of this protest. But how can this be, “we welcome them and they protest?” is only one of the many recurring thoughts among those people who have looked at Lampedusa without grasping the significance of these events.

To comprehend the latest events occurring on the island and to understand what the future holds for migrants landing in Lampedusa, it is necessary to clarify some of the critical issues inherent in the road map adopted by the Italian government following the decisions taken by the European Council on 14 September 2015. To cope with the migration flows and to ease the pressure on Italy and Greece, the EU has decided to relocate part of the migrants arriving on Italian and Greek soil to other Member States.

The migrants to be relocated, as clearly stated in Ministry of the Interior Circular no. 14106, are “those belonging to nationalities whose recognition of international protection is equal to or above 75% according to the last quarter of 2015.” Therefore, this includes people coming from Syria, Iraq and Eritrea. All the others are effectively excluded.
Eritrean migrants are part of this process, yet they protest. They have escaped from one of the most terrible African dictatorships that forces all citizens aged between 18 and 40 years to perform compulsory and permanent military service and that kidnaps and tortures those who oppose the Afewerki regime, and now they are protesting because they want the rights laid down by the Geneva Convention, by European laws and those of the individual members states to be upheld.

Moses, a young Eritrean we met in Lampedusa, explained to us, “We want to be reunited with our family members already living in Europe. Unfortunately, the relocation mechanism does not take into account what we want. They want to decide our future for us, as if we are objects.” As refugees, they want to be able to decide for themselves, they want to be the ones to decide where to ask for protection and where to live.
Therefore, their protest continues to the bitter end, knowingly wanting to avoid the fate of those who in recent days had left the island without leaving fingerprints, and who nevertheless were then “convinced”, even with the use of force, to identify themselves as required by Ministry of the Interior Circular no. 28197/2014 of 25 September 2014, in the CIE of Trapani Milo, today a hotspot.

For more than 24 hours, some of them have decided to go on a hunger strike until they receive assurances and guarantees from the Italian authorities. In the coming days, if deemed appropriate, they will go back to demonstrating in the streets of Lampedusa, to remind us all that in addition to a hot meal and a bed, they also want their dignity as human beings to be respected.