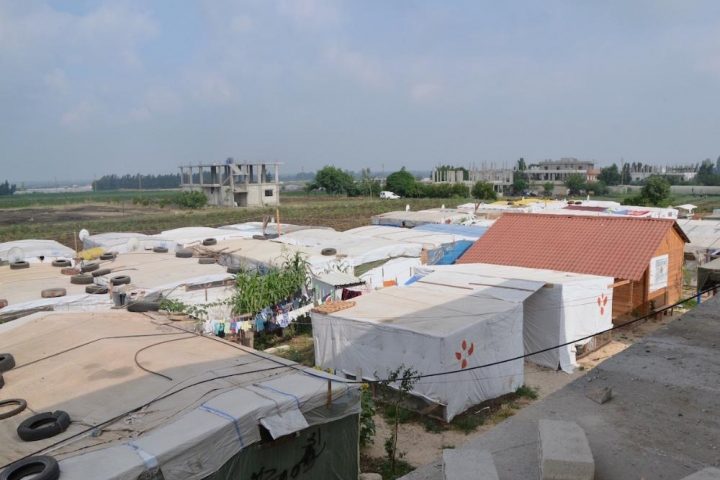 It almost seems like spring in Lebanon. The sky is clear and the sun is mild and warm, but not enough to warm the damp garage measuring about twenty square meters which is home to a young couple with two children, Hussein and Falak, aged six and seven years.

They have come from Homs in the Khaldiah district, but for two years have been living in a crowded suburb on the outskirts of Tripoli, north of Lebanon – among puddles, iron debris and rubbish thrown along the road overlooking their home.

In the single room, divided by a sheet into a living area and a sleeping area, there is a small gas cooker, an oil stove, a double bed for the whole family and little else. They fled Syria in a hurry, scraping together the essentials that today fill the dingy garage.
“We fled when the regular army set fire to our house. We left with the clothes on our backs, paying six hundred dollars to a taxi driver who brought us here,” explained Suliman, the father of the two children, to VICE News.

Their family will soon leave for Italy together with another 250 refugees who will land in our country thanks to a ‘humanitarian corridor’ set up by the Protestant Churches in Italy and the Sant’Egidio Community and funded by the “eight per thousand” tax funds donated to the Waldensian Church.
In this specific case, the procedure has been accelerated by the Italian and Lebanese authorities to allow little Falak to receive chemotherapy treatment in Italy.

In fact, Falak suffers from retinoblastoma, a rare tumour affecting the retina. She had her right eye removed at the Child Cancer Centre in Beirut a few days after Christmas and now needs urgent treatment to save her left eye.
“When our daughter was two years old, we brought her to Jordan for this condition but because of the war she could not get regular treatment,” says Yasmine, a petite and gentle woman, while pouring sweet chai tea and offering sesame cookies.

Yasmine speaks English. She studied literature for two years at the University of Aleppo before getting married. “I wish I could resume my studies and help other people arriving in Italy as an interpreter,” she says to operators of Mediterranean Hope.
While the voice of the muezzin resounds outside for lunchtime prayer, a limping man appears at the door. A young boy with chubby cheeks accompanies him.

They are Jihad and Bilal, brother and nephew of Suliman. They are not on the list of those who will be airlifted to Italy, but would like to try and leave together with Falak’s family. Those in charge of the project ask the older man why he is having trouble walking.
“I fell while running to protect myself against the air attacks. I broke my leg but could not receive treatment and this is the result,” he exclaims showing me his deformed knee. This man with the worn-out face has a sad look in his eyes. “I didn’t want my other children to enter the army of the regime,” said Jihad, “this is why we came to Lebanon.”

One million and two hundred thousand Syrians currently reside in Lebanon, a country with four million inhabitants, the equivalent of about fifteen million refugees in Italy.
The UNHCR estimates are an under-calculation because they were updated in May 2015, the month in which the Lebanese government asked the international organisation to stop the registration of refugees.
Some people live in garages, some in abandoned buildings, some in tents erected on land leased by the Lebanese owners and some, more fortunate, in apartments.
Soon – the exact date has not yet been announced – 250 people will be transported to Italy, taken from human traffickers and dangerous sea crossings.
The humanitarian corridor project is an Italian initiative that, according to Marco Impagliazzo, President of the Sant’Egidio Community also plays a crucial role in saving lives. “It is a project that guarantees both humanitarian protection and security, and that makes our country a leader in Europe for the reception of refugees.” The refugees will be welcomed in Piedmont, Sicily, Tuscany and Rome.
During the press conference to present the project, Eugenio Bernardini, moderator of the Waldensian Panel, explained that one million euros are currently available, and other donations should be arriving soon.
How does the selection take place? According to what was declared by Maria Quinto of the Sant’Egidio Community to VICE News, vulnerability is the main selection criteria.

“The embassy expresses an opinion, the Ministry for the Interior check the names, so there is already a process that involves various forms of controls,” explained Quinto. “That’s why we talk about vulnerability. We try to make sure that no requests for asylum are rejected, because clearly there are no plans to deport the refugees back to the transit country.”

Simone Scotto, one of the managers of the project, is in the garage where Hussein and Falak live. While Scotto asks Yasmine to bring the registration documents of the United Nations High Commissioner for Refugees (UNHCR), the woman asks the other operator to meet a classmate of Falak.
“He is a young boy of ten, without a leg, can you see him?”
After a few minutes, Dima appears from the corner of the road, hopping with his crutches and keeping his mother at a distance, who is slower than he is.

Luciano Griso, a doctor of the Mediterranean Hope team, who is accompanying the other operators, examines him. “He has a terrible wound, just like a war injury,” exclaims the gruff doctor with bitter resignation. “He needs a prosthesis.”

Dima and his family left Syria in late 2012, a few months after he lost his leg in an explosion at the front door of their home in Homs.
Another family included in the humanitarian corridor list lives in a humble house near Harissa, a suburb of Beirut, a famous place of pilgrimage. They arrived from Aleppo, Sulaymaniyah, a predominantly Christian neighbourhood.

They were a wealthy family of artisans. They owned a factory that produced high quality wood products sold in one of the traditional ships of the citadel. The area ended up under rebel control.

It was impossible for them to continue to work and they soon went bust. They were left without a job and facing an uncertain future. So they came to Lebanon two years ago.
Toufik, a Lebanese Franciscan monk, accompanies the operators of the project to the meeting place at the monastery. He tells Youssef, a tall robust man, about leaving for Italy together with his family of two children and a wife, Georgina, who like Yasmine speaks English.
The woman studied economics at the University of Latakia, and now works free as a mathematics teacher in a private school to allow her son Antony to attend the school.

The child was traumatised during the war and he stopped talking after his neighbourhood was bombed for an entire week. He should have started treatment with a psychologist, but these services cost money in Lebanon.
The project will allow her and other families to reach Italy safely and legally, on a normal commercial flight, and at a fraction of the cost than what a migrant would pay to the criminal human trafficking organisations.

As Francois Crepeau, a Canadian professor at the McGill University of Montréal and Special Speaker of the United Nations for migrants’ rights explained to VICE News, “the prices (of traffickers) vary depending on the route, period and demand.”

“There may be very organised smuggling networks that organise the whole trip from Istanbul to Berlin and generally the money is paid in advance, even up to ten thousand or fifteen thousand US dollars, or less structured networks where the migrant only pays for the sea crossing,” he adds.

“There is no fixed price, but definitely it is an absurdity to let this money fall in the hands of criminal organisations when it could be spent in the countries of destination, if there were safe ways of getting there.”
The family will be welcomed by the organisations sponsoring the project, which will provide them with at least one year of legal assistance, heath care and integration activities through language courses and job placement.
However, those who are ready to go to Italy have many doubts. “Will we get the documents? Are we allowed to go outside or do we have to stay in a detention centre? asks Youssef. “And what about the school for children?”

Giorgina is also happy but perplexed. She is afraid of the risks associated with a new journey to a faraway country. “What if we don’t find a job?” She asks on the verge of crying.
How can you blame those forced to start their lives from scratch? One of the other families going to Italy is an Iraqi family consisting of eight people. This is the third time they have fled. First, from the American bombs in Baghdad in 2003, then from the Islamic State near Mosul in 2014 and now from Beirut.
Therefore, no jihadists or criminals: only vulnerable people fleeing from war or several wars. There are millions more like them, but they are the one thousand lucky ones on the list.

A list that – even in different times, ages and circumstances – some believe is similar to that of Schindler, the German businessman who saved about a thousand Jews from extermination during the Second World War.