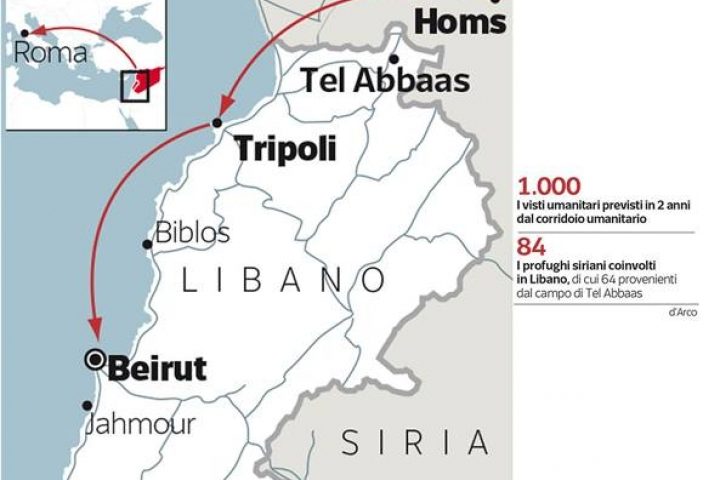 TRIPOLI (Lebanon) – After a month of on-line lessons that have been attended through a mobile phone, Yasmine, a young mother, has learned a lot of Italian words that now pronounces with amazing accuracy. “It is easy,” she said. Hussein is six years old and he knows how to count (he loses the thread around fifteen, but he learns quickly.) And when asked: what will you do when you are Rome? He has replied diligently: “I will study the language.”

Everything is ready. Last December, the Community of Sant’Egidio, the FCEI and the Waldensian Church signed an agreement with the Ministry of Interior and the Ministry of Foreign Affairs. Humanitarian Corridors are a pilot project that once started with the Al Hourani family could be immediately used for other families in Tripoli, northern Lebanon. 65 people have been already identified (thanks to The Pope John XXIII Community) in the makeshift refugee camp of Tel Abbaas, near the Syrian border. Maria Quinto, who inside the Community of Sant’Egidio has dealt with immigration flows for thirty years and Simone Scotta who was sent by the Waldensian church, have been in Lebanon for a month to study the cases of vulnerability (this is the criterion) to take under consideration: children, elderly people, single women, ill/disabled people. Not only Syrian and not only from Lebanon. Sunnis, like the Al Houranis but also belonging to other religious groups and nationalities. The first groups involve a total of one thousand humanitarian visas to issue in two years, and a quota also from Morocco. Transfers, accommodations and care fully funded by the religious communities that promote the plan, largely by 8 per thousand.

Once opened this corridor can means opening the rest of Europe. In March, it has been already scheduled a meeting with Dimitri Avramopoulos, the EU Commissioner for Immigration. According to this project organisers, this is the only alternative to smugglers, life jackets filled with sawdust and unsafe boats sailing across the Aegean Sea or a few miles from the coast of Sicily. “Following the toll of Lampedusa (October 3rd, 2013) we had very clear the unbearable absurdity of these people perishing at sea – Maria Quinto said. We had talked a lot about Humanitarian corridors but without finding the key. As long as we studied the law and found the opportunity for Member States to issue valid humanitarian visas. ” Two are the benefits for the Host Country. “No money spent on reception and the opportunity of selecting who allow to enter” as the final approval is given only after carrying out the security checks. Following this process, it would be also possible to combine a “sponsorship mechanism – Maria Quinto added who already works with a Canadian sponsor – private citizen’s associations, churches, etc. – that could fund the trip and the stay of the asylum seeker.
The point now is that the experiment will begin with Falak. This family has already left fingerprints at the embassy in Beirut after filling in the forms. They only need the final approval from Rome. Our appeal is to the Italian government: Falak cannot wait, also the doctors of the Bambin Gesù Hospital which are ready to treat her, had pointed out the urgency of this case after reading her medical records.
Moreover, the room that Suliman has rented after fleeing from Homs is not a suitable home for an ill child. Two hundred Euro per month for few square metres opening on a street full of waste and car carcasses. Yasmine said that it was cheap. Two sofa chairs, three sofas, a bed beyond a curtain. A camp gas cooker. Entangled electrical wires dangerously hanging all over. Suliman whose job was fixing televisions and continues to do it when it can, always keep an eye on them.

The Al Hourani family fled from Homs two years ago just with their cloths and documents during the bombings. They crossed the border on a taxicab and through word of mouth reached that ramshake building with perforated walls, left in memory of the civil war.
That is a common condition for one million of Syrian refugees who crowded Lebanon in makeshift camps, shanty buildings to squat or rent. Like the story of the 10-year-old Deia, that in Homs due to a mortar bomb has lost one leg, badly amputated in a makeshift surgery unit. Immediately after Falak, it will be their turn to move via that humanitarian corridor, and he will have a prosthesis. With four years of experience along the crooked streets of Tripoli, Deia is almost able to run with crutches although looking forward to leave. When asked “How do you think is Italy and what do you expect?” Deia replied with a shy smile: “One leg”.