No More Death! No More Exploitation! 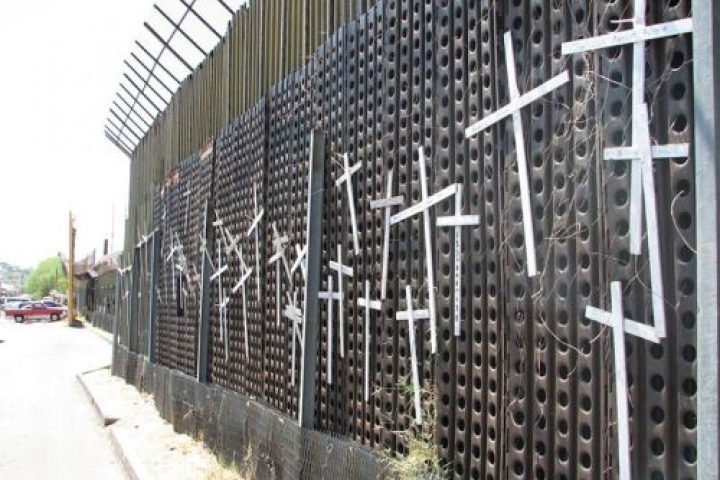 Arizona February 24th, 2016 (USA) – As every week I am at the immigrant shelter located in Nogales, Mexico, close to the U.S. border. Today, everyone is excited at KBI – an initiatives run by Jesuits. The eyes of the whole world are on Mexico, on this border and the people who have been crossing it. There is a screen among the tables and the benches on which immigrants receive two hot meals a day, as well as information about their rights. A live stream of Pope Francis’ visit to Ciudad Juárez is about being broadcast. Ciudad Juarez is another border town in which is possible to collect the stories and faces of those who are fleeing violence and despair. Joanna Williams, a young KBI’s operator, has told me that just a year before the Jesuit group invited the Pope to visit the city of Nogales “to share what we are doing here, what is the situation of the immigrants and how we could try to humanize this difficult situation.” Mexico is one of the countries with greater rate of violence, in which drug cartels have a strong control over the population and close ties with institutions and police. It is not very different – or even it is worse – the situation of some countries in Central American -such as Honduras, Guatemala, El Salvador from which many people are forced to flee poverty and the daily abuses by ruthless criminal groups, which do not avoid inflicting violent killings or unjustified disappearances. Joanna has told me how difficult could be to apply for asylum in the United States, even though these people have fled terrible conditions. They must demonstrate, in fact, that they are victims of acts of persecution, not only of violence. “If you have left your home country – Joanna said – because all your neighbours and relatives were killed, your shop was burned and you were approached by drug cartels, it may not be enough to require protection. And, however you should wait in a US detention centre for at least six months.” For this reason, many immigrants try to cross the border illegally. Many of them cannot succeed in their attempt as traffickers make them disappear, or perish in the desert. Others are stopped by the border police and enter the US penal system. “Many immigrants that I have met in Nogales – Joanna said- tell me to be guilty, because they have crossed the border without being allowed. They are not aware of their rights, because they have never been told about their rights. But as the Pope said, it is not about numbers, they are people, they are stories, they are human beings.”

The border between the United States and Mexico is also one of the most militarized in the world and the criminalization of the immigration system is so deep that, as Joanna said, many people feel to be a criminal because of the time spent in prison and in the detention centres before being deported to Mexico or other countries in Central America, as they were criminals instead of victims. The work of the KBI, therefore, is also to collect the stories of the abuses they have suffered, both in Mexico by traffickers and authorities, like the police, and in the United States by the Border Police or in the detention centres. Violence is very frequent and immigrants are among the most vulnerable people, whose voice and whose complains are kept unheard. “There are many initiatives that defend the human rights of migrants like KBI. When Pope Francis made reference to these organisations, it was a very moving moment and a great encouragement, – Joanna said- to our work which is not only humanitarian but also political. We try to do our best to to help these people, but when we give food, water, we make phone calls, we wonder why they have ended up in such situation. And, thinking about the political implications of immigration poses spontaneous questions. ”

Thus, “No more death, no more exploitation”, words that come from the border between the U.S. and Mexico which is one of the many walls of our time and a symbol of injustice and inequality constantly under our eyes.