The Call of Lampedusa’s Parish Priest: “Europe Find The Courage” 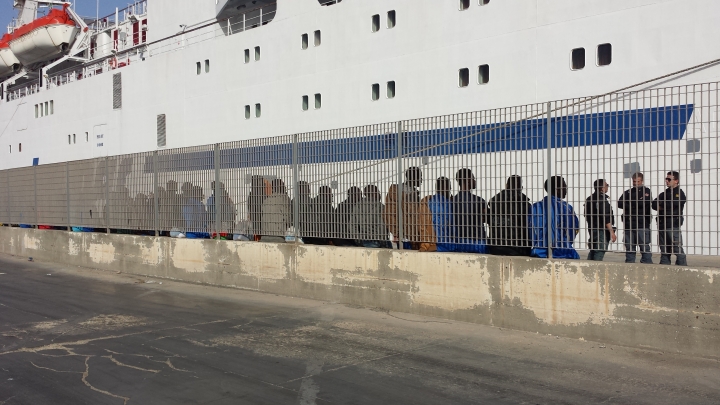 “We faced the colonialism and the fact of being enemies in two world wars, but now with this refugees flow we have forgotten it all. We need someone with a new vision”, Don Mimmo Zambito has recently said. Currently, Don Mimmo Zambito and the local volunteers have been mediating between like 20 people who have slept out of the hotspot for days since they want to reach Northern Europe instead of apply for asylum in Italy, as provided by the Dublin III Regulation.

“I have told one them many times – one of the people from Sudan who have been sleeping out of the hotspot for days, here in Lampedusa. I had him sit at my computer with the map of Europe to explain him that Sweden, in which his wife entered as refugee is far away from Lampedusa and it is separated by many borders. To date, it is not wise to travel towards Sweden in such a current difficult situation in which seems to prevail the logic of the walls. But, he is still refusing to be fingerprinted at the hotspot identification centre which is wanted by the EU right in the CPSA, first aid and reception centre, Contrada Imbriacola – as he will be then forced to stay in Italy, if succeeding in apply for asylum. ”
Don Mimmo Zambito, parish priest of Lampedusa since 2013, is clear: these people have faced every kind of difficulties of the reception system and the solutions in use have limited impact on this phenomenon which pushes thousands of people to lose their lives in the Mediterranean Sea and tens of thousands of survivors to try to overcome the bureaucratic obstacles that are increasingly in force in a brutal Fortress Europe.

On Saturday, May 8th, 2016, there were 70 migrants of various nationalities – most of them from Sudan and Egypt – walking away fro the hotspot: “They are not supposed to leave the centre, but in fact they do leave since setting off an island is impossible without papers and however in this way they alleviate the pressure on the centre that has long passed its capacity”, said Don Mimmo. After few days of protest their number reduced to almost twenty. “We had moments of difficulty and tension since we found ourselves facing a kind of perfect storm or a lack of immediate mediation by the population – starting with our parish as they were engaged with Confirmations – by nuns , Caritas, the Tavola valdese and activists, as it almost always happens in situations of emergency in Lampedusa”, said Don Mimmo. “Fortunately, anything serious occurred and even the migrants have understood the various situations, for example by moving their protest to the church square during a funeral.” The diversity of nationalities has led to different types of requests. Thus, after the first confused days and following further negotiations with volunteer s and lawyers some of them returned the hotspot and accepted the identification. Those ones were transferred to Sicily, while 11 of the first group are still out of the hot spot in Lampedusa asking to be transferred to Agrigento and then identified. The Council of Lampedusa is one of the newly formed networks of mayors against the walls, just launched by the local mayor, Giusi Nicolini.

“The controversial Dublin III Regulation is a crucial issue”, said Don Mimmo “because after fingerprinting these people do not know what they can expect. In particular, only some nationalities are guaranteed asylum application and, according to breaking rules, the consequent relocation in other states – namely Syria, Eritrea, Afghanistan and Iraq – others, referred to generically as economic migrants, risk rejection. But, we are talking about people whom we should listen to them one by one, because each life story is different, full of complexity. And neither the sun nor the thirst has stopped many of them from moving to Europe in search of a better life.” The association denounces the practice of deferred refoulement that is the practice of leaving the person in Italian territory outside of a structure holding an expulsion request to be met within seven days from Fiumicino instead of an asylum application. “Italy performs an act of great civilization in saving lives at sea. But then such action is blocked for the uncertainty of the European law”, said Don Mimmo.

“This temporary support is represented by the fact that such refoulement document left in the hands of the migrant and the many testimonies that they were not informed about their right of asylum are conditions that could be claimed by lawyers and the civil society for an appeal and therefore often delay that immediate return. But, this is one temporary solution, we would like a solution that reconciles humanity and law. The problem is that today we are in a European Union that is losing a great opportunity.” Which one? “To prove our European Community to have courage and to confirm the unitary spirit with which the EU was born. We are talking about countries that have put together after being colonialist for decades before seeing limits and errors, after having made war with each other, causing millions of deaths. Now, facing with the request for help of so many people who come from outside, instead reassert its values we will close in selfishness”, said Don Mimmo. Honestly, I often feel despaired. Then, I found my hope, of course, but to get out of this dark period it would take the arrival of institutions with a new and courageous vision. To make a real step towards the others”.