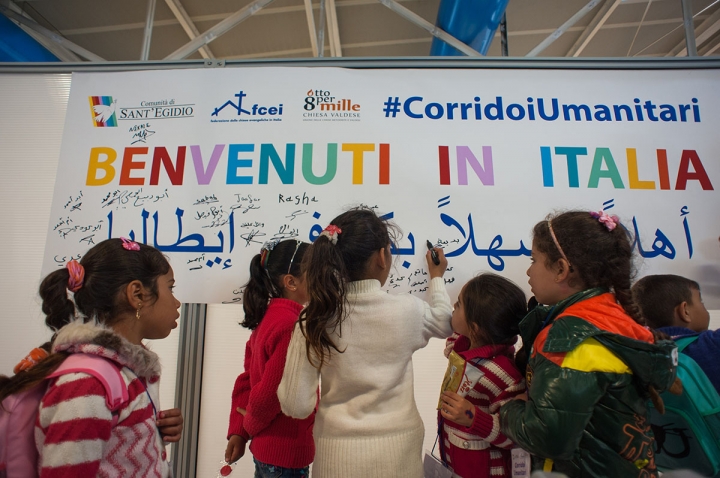 “Several Members of the European Parliament are in favour of the Italian initiative, which now enters formally into the European Political Agenda”

Rome, 30 June 2016 (NEV/CS43) – “Our ecumenical project of “humanitarian corridors” in Europe has received a truly positive and encouraging welcome,” said Paolo Naso, who was in Brussels on June 28th representing the Federation of Protestant Churches in Italy (FCEI) in a meeting at the European Parliament, aimed at expanding to other European countries the “good practice” already implemented successfully in Italy. According to the Vice President of the European Parliament, Antonio Tajani, who also attended the meeting, this initiative deserves international support.

In addition to Paolo Naso, Mauro Garofalo, head of international relations of the Community of Sant’Egidio, Eugenio Ambrosi, Regional Director for Europe of IOM, and Giulio Di Blasi, Cabinet Member of the VP of the European Commission Federica Mogherini, also spoke to an audience of about 150 people, including European MPs, Cécile Kyenge and Elly Schlein.

“Today’s meeting was held in an atmosphere of great interest and marks a fundamental step for the promotion, duplication and expansion of the humanitarian corridors. The Italian initiative – promoted by the Federation of Protestant Churches in Italy, by the 8%o tax funds of the Waldensian Board and the Community of Sant’Egidio as part of a protocol signed with the Ministers of the Interior and Foreign Affairs – was shared by several Members of the European Parliament, and now enters formally into the European political agenda,” declared Paolo Naso at the end of the presentation, adding: “While we are here in Brussels, our work continues in Lampedusa and Scicli, and in all the Protestant and Catholic centers that welcome migrants, who in this precise moment are still landing in Italy after being exploited and humiliated and after having filled the pockets of murky traffickers at the risk of their lives. Humanitarian corridors are a safe, legal and sustainable alternative to this brutality that Europe is witnessing”.

The Protestant side was represented by Pastor Steven Fuite, President of the United Protestant Church of Belgium (EPUB) and for the Churches’ Commission for Migrants in Europe (CCME) the Executive Secretary, Thorsten Moritz.

To date, the “Human Corridors” initiative has allowed nearly 300 Syrians and Iraqis (including many children) in possession of a humanitarian visa to safely reach Italy via a regular scheduled flight from Beirut, Lebanon.

The “Humanitarian Corridors” allow refugees in particularly vulnerable conditions to enter Italy by plane thanks to a “humanitarian visa”. The legal basis of this ecumenical initiative is based on article 25 of the EC Regulation no. 810/2009 of 13 July 2009 establishing a Community Code on Visas, namely the possibility to grant visas with limited territorial validity, notwithstanding the standard entry conditions provided by the Schengen Borders Code “for humanitarian reasons or national interest or due to international obligations.”