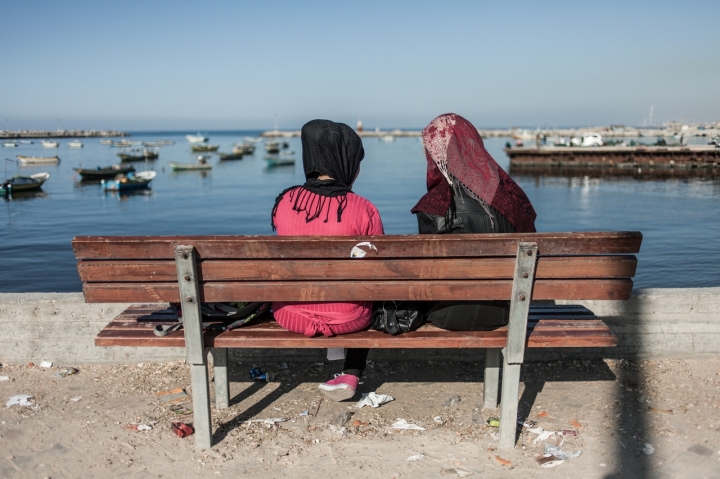 from Carla Aday, pastor from the Christian Church (Disciples of Christ) in the USA, volunteer within MH – Lampedusa

Dressed in the government issued pink flowered jeggings and white tshirt she fingers the the cheap white plastic cross around her neck. Her petite frame suggests the age of 14 but in clear and accurate English, she says gently but confidently that she is 16. The other teenage girls surround her with their eyes cast to the ground, occasionally grabbing her arms for guidance about what to say or do next. She’s like the babysitter that any mother would trust. Only in this case, she shepherds other teenage girls, who like her, have left mother and father, traveling thousand of miles across dessert and ocean to seek a life that isn’t clouded by repression and violence.

If she had been born in Kansas City or Rome, she would be a competitive student in the the math club or an star football player. But Kidisti was born in rural Eritrea, the eldest of 5 girls and her father, a farmer and her mother have dreams for their children. The dreams do not include mandatory and indefinite military conscription beginning at age 18 for both daughters and sons. So her parents, along with her aunt and uncle, earned the $5000 needed to escape Eritrea. I told Kidisti that her family must have a lot of confidence in her to spend that much money for her to immigrate and she said “many many money”

As a parent, I cannot imagine sending my child away at such a vulnerable age. But I have never longed for freedom to express my faith, nor feared that I could be imprisoned and tortured without a trial. The country that Kidisti fled was described by the BBC as “one of the most secretive states in the world.” According to The Economist, Eritrea abuses the human rights of its own people. “Dismal” is how the Human Rights Watch describes the situation. And all of this horror is exacerbated by the lack of an independent press or access to electronic communication that other countries have used to mobilize its citizens to protest. So Kidisti left her country in search of freedom. In Eritrea, “we cannot talk about problems.” While millions in the west worry that their teens spend too much time on the Internet, only 6 percent of Eritreans have been on the Internet, according to a 2013 BBC report.

Kidisti left home on foot, cautiously stepping through the East Africa where hyenas can steal your life. She approached the border with Ethiopia with caution, fearful of the military police whose rifles can rob your very breath. Once safely across the border, she lodged in a camp for two months and learned English. From Ethiopia she took a bus to Sudan. And then came the treacherous crossing of the desert. Over 100 people were crammed into the back of a flat bed truck. Her mouth was parched from no food or water for 2 days. Her heart sank when 6 of the women on the bus were raped. Ten days later she reached the coast of Libya. She boarded a couplet of boats holding 1100 passengers. The lead boat had a motor and carried 750 people and the second boat, carrying 350 was towed by the first.

Now she is in Lampedusa, a small Italian island in the Mediterranean that is the doorway to Europe. “ What are your dreams?”, I asked her. Her face lights up as she tells me “I want to study math and English.” I retort, “but your English is so good.” With a sheepish grin she says, “But I want to be perfect.” She hopes to become a pilot and earn money to send home to support her family in Eritrea. Her courageous spirit, her keen mind and her tender compassion give me hope for the world. How dare we stand in her way of following these dreams. I ask her, if she had one message about this journey that the world should know, what would that be. “This trip is too dangerous. People should not do it. They should fly.” I vote that J should be the pilot!