The memory that leaves a mark on the present 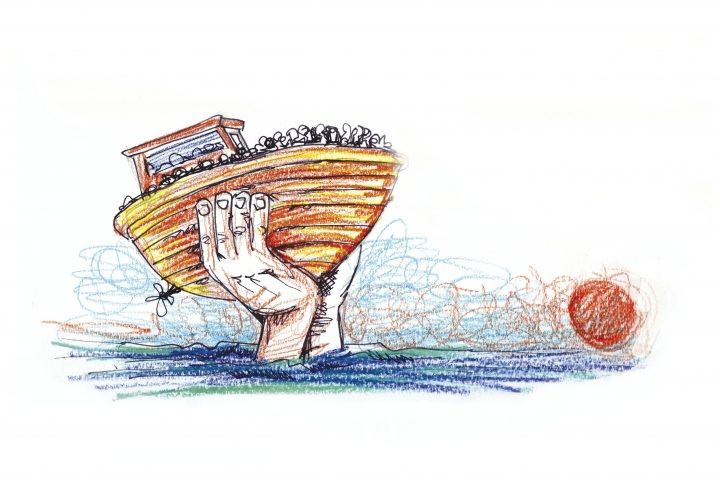 “The memory that leaves a mark on the present” will be an ecumenical celebration to remember the victims of the tragedy of 3 October 2013 when 368 people fleeing war, persecution and violence lost their lives in a shipwreck a few miles off the coast of Lampedusa. This date is still an open wound for the survivors who lost loved ones and for the people of Lampedusa who, rescuing people from the shipwreck, saw so many people to die right before their eyes. But the date of October 3 is also a wound for our countries and for all of us who witnessed the failure of recent immigration policies in that tragedy.

Three years from that tragic event the parish of San Gerlando, the Federation of Protestant Churches in Italy and the Community of Sant’Egidio will once again organise a moment of meditation and prayer, a space to share the pain and memory but also a time to say emphatically that we do not want to endure more deaths and other tragedies.

Together, we want to remember the victims of October 3 and of all the borders, but also to reaffirm that deaths at sea can be counteracted by opening legal and safe pathways in Italy and Europe. Thus, in remembering this painful event, we want to give a sign of change. The experience of the Humanitarian Corridors set up by the Federation of Protestant Churches, the Waldensian Board and the Community of Sant’Egidio is an example of what the European Union can do to guarantee a safe access route to Europe and the right of asylum to people fleeing persecution, violence and torture.
Therefore, in remembering the victims we want to stress the urgency of a new migration policy based on principles of sharing, solidarity, respect for human rights, which implements and extends the experiences of the Humanitarian Corridors and goes beyond the Dublin Regulation to build an effective European asylum and reception policy. 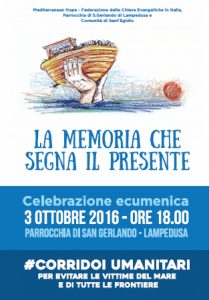 In an effort to make a real commitment in proposing the immediate opening of safe and legal pathways to Europe, on Monday 3 October 2016, at 18.00, in the parish of San Gerlando, Lampedusa we will create an ecumenical space together with those who want to participate, aimed at remembering and honouring the thousands of victims who die along the borders.

We will do ecumenically, with the participation of the members of Dutch, German, English, Scottish, Spanish and American churches that have decided to share this moment of memory and commitment in support of the “Humanitarian Corridors”.