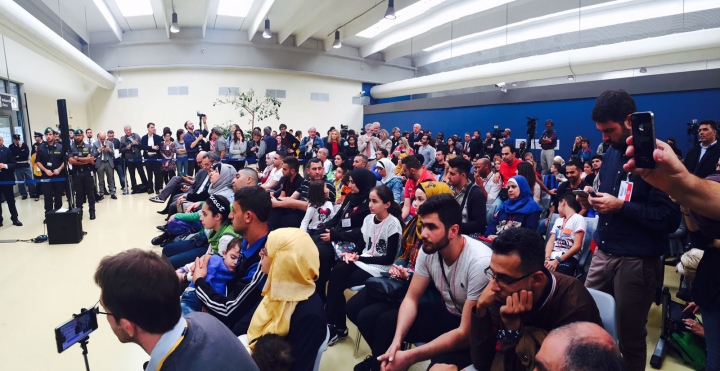 Rome (NEV) – October 26, 2016 – Thanks to the humanitarian corridors, last Monday and Tuesday another 128 people arrived in Italy from Lebanon. I was asked to give my opinion on the matter. An opinion from someone who works upstream, in Lebanon, before the arrivals, flashes, smiles and handshakes and with the sincere knowledge of obtaining a small important result.

The operator’s role on the field is not easy, or at least I don’t see it as being easy. It is emotionally charged, a “weight” that should not influence our mood or our relationship with colleagues, or, even worse, the possible beneficiaries of the project.

Today, one day after the arrival of the fourth group in Italy, I am feeling pleased, very pleased. There is an awareness of having carried out a unique project, in Italy and, we hope not much longer, in Europe. The joy you get from an arrival comes from the fact you have achieved your goal: to ensure that a group of people get the chance to start afresh, to start living again after years of interruption because of war and the difficult living conditions in Lebanon. Small numbers, no doubt, but numbers that allow the project to organise a widespread and individual reception, a path attentive to the needs of people. I see this project as a model in expansion: the challenge is to expand it at a European level. Mind you, it is not our job to change Europe. However, it is our job to show a political class that there is a creative and feasible solution to the immigration problem.

On days like these, I cannot hide my satisfaction. Now when there is the certainty that the person or family under your care will arrive in Italy, the relationship also becomes personal. I am 27 years old, I am Italian, and my work on the field in Lebanon gives me the chance to meet people who have lived a completely different life than mine. Considering the young average age of the Syrian population, those people are often my peers. In Lebanon, I met a girl aged 26 with five years of Psychology behind her and who was missing two exams to obtain her degree. Before she could complete her studies, Homs, her city, went up in flames, and she had no choice but to flee. In the middle of all this, she lost her father and brother. It’s easy to identify with someone who is the same age as you, and that is when you personally see the sea of possibilities that separates the two sides of the Mediterranean.

You can’t help but become emotionally involved when you come face to face with these people. You are there, with a pen in your hand. You listen to the horrible situations they experienced between Syria and Lebanon. And you continue to write and jot down notes, you look at them, you look into their eyes, but you listen to the translator. Imagine how much more difficult it is for her to hear everything in their native language.

The stories remain, they don’t wash away like water. And many of those stories remain in Lebanon. We are not heroes. We are happy to have made a big difference in the lives of some people: 400, not many, in less than a year.

I feel lucky working on this project. This feeling is comforting and never leaves me.