Humanitarian Corridors: Other arrivals from Lebanon with the pilot project carried out in collaboration with the Federation of Protestant Churches in Italy (FCEI) 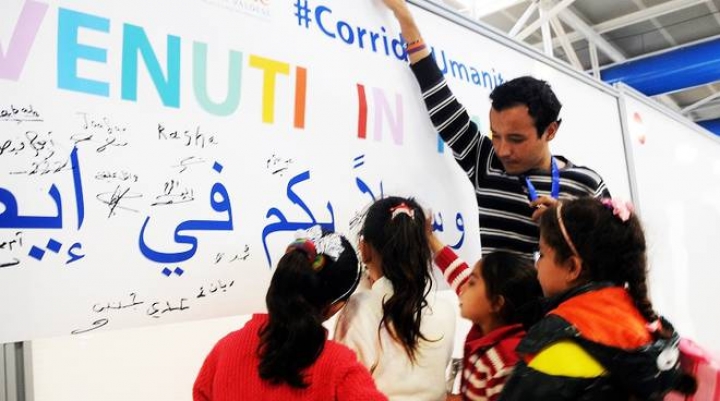 Rome (NEV), 23 November 2016 – Thanks to the “humanitarian corridors” created by the Federation of Protestant Churches in Italy (FCEI), the Waldensian Executive Board and Community of Sant’Egidio, another 100 refugees (mostly Syrian) from Lebanon will arrive at Rome International Airport on 1 and 2 December 2016.
Less than a year after the launch of this project, created under a memorandum of understanding signed between the promoters and the Ministries of the Interior and Foreign Affairs, the number of arrivals for 2016 has reached the expected 500.

“This is a very important result,” commented Paolo Naso, coordinator of Mediterranean Hope – Refugee and Migrant Programme of the FCEI. “This number was reached due to the sustained support of the ministries concerned, of our various international partners, the generosity of the Waldensian Diaconia, numerous Evangelical churches and Catholic parishes, who have carried out an outstanding work of reception and integration of refugees. Less than a year after the launch of the project, in a Europe that is silent or builds walls and closes borders, Italy indicates a different and alternative route that has broad support in the civil society of other EU countries. We ask these countries to adopt the model of humanitarian corridors in order to transform a good national practice into a shared tool for managing the flow of refugees in vulnerable situations. “It is not a complete solution to the migration phenomenon,” continues Naso, “but, under the current legislation, it is an effective and sustainable strategy to guarantee protection to the most vulnerable.”

In recent days even the Episcopal Conference of Italy (CEI), in cooperation with Caritas, Fondazione Migrantes and Sant’Egidio, announced its commitment to support new humanitarian corridors for 500 refugees. “This is an important result,” comments Naso “which gives us satisfaction for at least two reasons: the first is that it allows others to follow the path that we have identified and already traveled; the second is that a courageous ecumenical experience was able to activate the direct involvement of the Catholic Church. This example is a measure of the strength and potential of the ecumenical movement that, when it finds courage, has the chance to precede and anticipate the decisions that are then also adopted by the church institutions.”

As provided for by the Memorandum of Understanding with the Ministries concerned, the coming months will see the opening of other corridors from countries such as Morocco and Ethiopia. “Thus we enter a new stage of the project,” explains Naso, “which will put us into contact with situations different from those of Syrian refugees concentrated in Lebanon. Unfortunately, the persecutions and destruction suffered by the Syrians are by no means an exception and one of the aims of our project is to protect particularly vulnerable groups such as those coming from West Africa or the Horn of Africa who are concentrated in Morocco and Ethiopia. As Christians we cannot let ourselves be limited by the logic of geopolitical opportunity and we must also look at the weakest and most forgotten refugees, migrants and displaced people.”