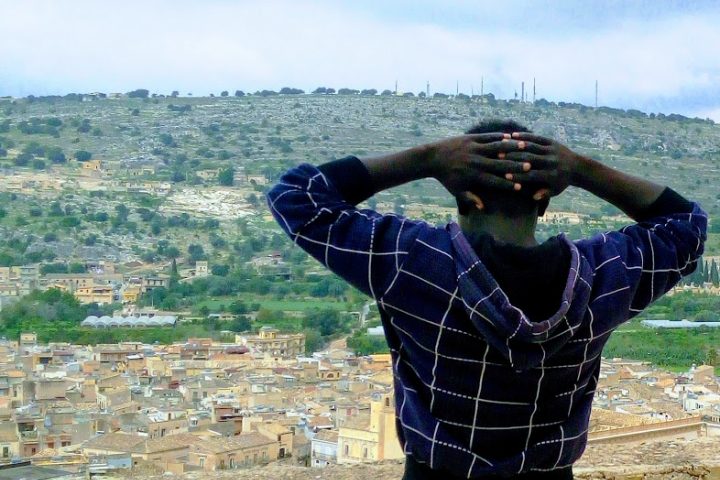 Valentina Reale, Operator of Mediterranean Hope at the House of Cultures of Scicli

Scicli, Ragusa (NEV), 11 January 2017 – Ismail has just arrived together with Mohammed, Abdi, Amina, Blessy and Ruth. As always, when a new guest arrives at the House of Cultures (Casa delle Culture), I take them on a tour of Scicli to allow them to get oriented. We first go from Piazza Italia to the Mosque, then from Santa Maria La Nova to the soccer field that is close by. Then we head up towards San Matteo, which has a beautiful view of the whole city, where each street can be distinguished as well as the places we just passed and the House.
Ismail already speaks a few words of Italian, and it is amazing. He asks me to speak to him in Italian. He tells me that he only speaks Italian and will not understand me if I speak French. He makes me smile. He is good and does nothing but look around and repeat to the rest of the group: ʺil faut avoir courage!ʺ (You have to have courage!). As if they did not already show how courageous they were by leaving their families and their country and everything they knew to come to Europe, of which they only had a vague idea, made up of soccer players and glossy magazines featuring rich and famous white people. When I tell him that I have used up the credit on my phone, Omar does not believe me. This cannot happen to a white person. This idea is clearly based on their experience in Africa. They are young and have seen white people living in their countries lead a wealthy and comfortable life, sometimes with luxuries that they could never afford in Europe. They are young and they see the African soccer players who play in our soccer league.

‘’Il faut avoir courage!’’ continues to echo in my head.

The time has come for them to start again. Now that they have arrived alive, they need to continue to have courage and to be brave, as they will need it during the rest of the journey to complete the project that drove them to leave. Ismail has an abundance of courage, he gives some to his companions, he encourages them, and he continues to study Italian. He is learning so much and I can see it in his eyes that he still has many questions to ask me. He laughs about the new habits, asks questions about new foods. He is happy to be in Italy and he wants to stay here. He is working hard to understand our society and to learn and know as much as possible.

Ismail comes from Guinea Conakry, and despite the subjective right of protection, he probably will have no right to stay in Italy. If that happens, Ismail will have to find more courage and face reality once again. He will have to become aware of having experienced the harrowing trip for nothing, of having risked his life every day in Libya and at sea needlessly, of having left his family in vain, a family who counted on him to escape the grip of hunger.