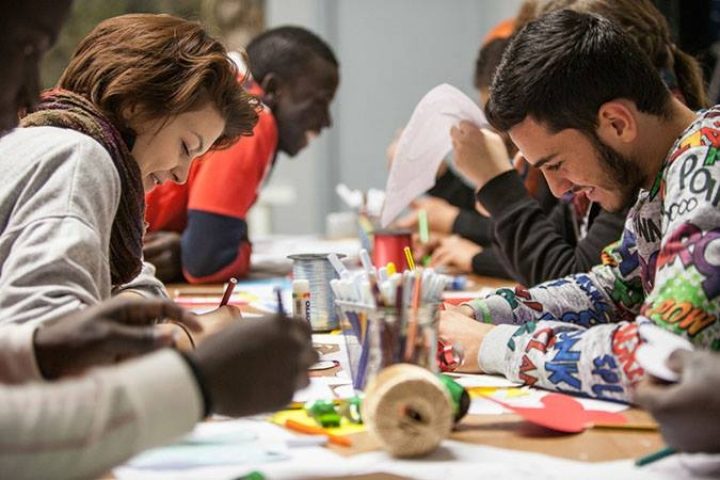 There are words that unite us, words shared by strangers brought together by history to live a period that has become unforgettable, in good and bad. All the people who have arrived and who continue to arrive at the House of Cultures (Casa delle Culture) had to spend a short or long period in Libya, the departure point for their arrival in Europe. Sadly, as we know, the migrants in the former Italian colony experience imprisonment, violence, torture, racism, hunger, and fear. The nightmares and trauma from that period remain, as do the words. Arabic words, Libyan Arabic. Months later and in a completely different context, the boys still use these words. Like Lamine who calls everyone by saying “taal” or “vieni,” which annoys the other boys because the Libyans used this word to call them menacingly so that they could rob them or even kill them. While they tell the story, they use the word “mushkila” repeatedly, another Arabic term which indicates “problem”. “Libya mushkila”.

I have tried to ask those living at the House of Cultures if there is a word that encapsulates their entire migratory experience: the departure from their country, the journey, Libya, the Mediterranean, Italy, their expectations. Mamadou from Gambia answered with a drawing accompanied by a text in English, his word is “inflatable”, the vessel of fortune he boarded to leave the Libyan coast. It was carrying about 40 or 50 people but the “Libyan traffickers didn’t care and had no qualms in letting 120 or 140 people climb aboard. Everything to make money, to make a profit.”

Eric from Cameroon, instead, is worried about his future. His word is “restaurant”. He wants a job, but not just any job, he wants to work in a restaurant. “It is in the kitchen, among the food, where I feel gratified. I know the cuisine of my country very well. I have crossed six African countries. In Algeria I worked in a restaurant that served local cuisine and now I am in Italy. I am ready to create new food, the result of my life experiences.”

“Lucky. Yes, I have chosen the word lucky,” says Khawla in surprisingly good Italian for someone who has only been in Italy for a few months and who had to completely change his linguistic approach coming from the Arab world. “I was lucky in Libya because compared to other people I didn’t have any big problems. I was lucky at sea because even though the inflatable dinghy deflated and filled with water, I didn’t die. I’m lucky because I’m still in Italy, but I also want to be lucky in the future.” Khawla needs luck because in a few months he will turn eighteen and he doesn’t know what will happen to him without a residence permit.
After receiving these frank answers, I also asked myself a question: what word would I use to describe migration and the experience that I am living every day?

But I have to choose only one word and my word is “Story”. Every moment spent at the House of Cultures is taking part in a story, listening to the stories of the boys is observing history, seeing history passing in front of my eyes. History is made with individual choices, individual actions. The story of each one of us intertwines with a bigger story, that’s why we cannot turn our heads away, nd pretend that it doesn’t concern us. A story does not need a heroic deed, but it simply asks us to know, understand and listen. We can pretend nothing is happening, but history will not absolve us.