The Ordinary and Extraordinary Experience of Sharing 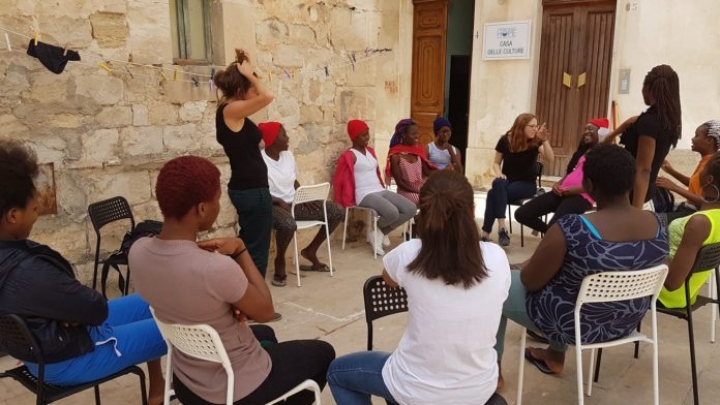 by Nora Dannenmann, MH’s volunteer at the Casa delle Culture in Scicli

Rome (NEV), June 7, 2017 – The “Lo sguardo dalle frontiere” editorial is written by the operators of Mediterranean Hope (MH), the migration project promoted by the Federation of Protestant Churches in Italy (FCEI). This week story is from the Casa delle Culture in Scicli. The Casa delle Culture was opened in December 2014. This structure offers hospitality to migrants who are in a vulnerable situation (young mothers, pregnant women, unaccompanied minors). Besides the reception, orientation and training activities, this centre promotes social, inter-cultural and integration programs which are open to the citizens since aiming to foster the intercultural initiatives.

“Let us celebrate!” Today we celebrate!” I can see a smiling face that looks at me to make me understand, with so many gestures, what is going to happen today. But, I had understood the meaning of celebrating – without speaking Italian also at the beginning of my experience at the Casa delle Culture in Scicli.

Nine months ago I came from Germany and started my volunteering work at the Casa delle Culture. A week after my arrival we organised a celebration. I can perfectly remember that day during which I felt really impressed. All together, kids, operators, volunteers and some friends of the Casa delle Culture gathered at the country house of Giovannella Scifo, the responsible for the structure in which I was homed. After a barbecue party, we played drums and guitar, danced together and talked, too. It was a beautiful day. It had been a chance to speak with so many people – to know and to make me know. At the end of that day, I felt that I did landed Sicily that moment.

A month ago, to celebrate May 1, we went back to Giovannella’s home. And, again, we had lunch, played, danced and talked. But, that time it has been very different to me. Not only because have so many hosts of the Casa delle Culture left and many others have arrived, but because over these months I have changed. the volunteering experience with the kids and the relationship with my colleagues gave me the opportunity to learn a lot. First of all, the language, even though I still have many things to study. I have learned many things that have changed my personality: I became more self-confident, more independent, more competent, even though I am just nineteen.

The work here at the Casa delle Culture has given me the chance to plan my projects to have a clearer idea about my future. I have been very happy over these months. We had beautiful moments, celebrations, birthdays, Kevin’s birth, and sad ones, too (terrible stories, medical urgencies and mourners affecting the most beloved ones of our kids. I do not want to forget anything. Everything that I experienced has allowed me to grow. My experience at Scicli, the friendships, moments of happiness or sadness, all contributed to make this volunteering work an unforgettable time of my life.

I would like to say thanks to all the people I met. I still have three months before the end of my experience, in which we will share other intense and important moments. In short … the ordinary and extraordinary life at the Casa delle Culture