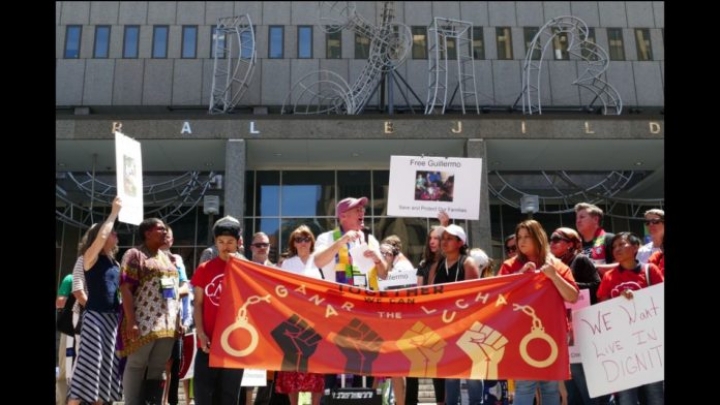 Rome (NEV), 11 July 2017 – The “Lo sguardo dalle frontiere” (A look from the borders) editorial is written by operators of Mediterranean Hope (MH), the migration project promoted by the Federation of Protestant Churches in Italy (FCEI). This week’s “look” comes from the Synod of the United Church of Christ in the United States

We leave the huge building of the Baltimore Convention Center in Maryland (USA), and we are hit by a wave of heat. Between the indoor air conditioning and the 40 degrees outside, there is a difference of about 15 degrees. But this does not stop us and the other 300 people gathered and ready to march today on July the 3rd 2017 in support of immigrant families who are being separated in the United States and whose members are being imprisoned and deported.

We are at the General Synod (30 June-4 July) of the United Church of Christ (UCC), one of the most progressive churches in the United States as well as an international partner of the Waldensian Church and the Mediterranean Hope project of the Federation of Protestant Churches in Italy (FCEI). This is why I am here, to represent Italy and the work done by the Protestant Churches to help migrants. It is interesting to see how big this Synod is, we are talking about thousands of people from all over the United States, who vote, participate, and give life to this vital and dynamic church. The UCC is highly committed to social issues and fights battles on equal rights for all, white and black, by supporting the Black Lives Matter movement, people of different sexual orientation, native groups fighting for their land, better defined as reserves, and numerous other battles. One of the most outspoken and well-known people in this synod is Pastor Traci Blackmon, an African-American woman. She is a key figure in the ongoing battle to recognise the rights of black people in the USA. On the first day, she preached enthusiastically from an enormous stage, with a loud voice and thousands of people applauding. During the July 3rd demonstration, when the march stopped in front of the Immigration Customs Enforcement building, she was the one who said: “If we were not here today to demonstrate for all the families who have been separated, for the injustices that we see perpetuated every day, then we cannot call ourselves a church that spreads the word of the gospel.”

Emotions are high but the torrid heat does not discourage us. One of the daughters of Gulliermo Morales takes the stage and speaks in a trembling yet determined voice. Morales is an artisan from Salvador, who has been waiting 10 years for asylum in the USA. He was arrested by the ICE in front of his house last April without ever being charged with any criminal offence. We are here today for him and to protest against the tightening immigration policies that are taking place with Donald Trump’s presidency, such as increased militarisation at the border, multiplication of detention centres and deportations.

The UCC has been on the frontline for years. For at least 15 years, it has been at the US borders to the north, towards Canada, and to the south, towards Mexico, offering help to those who risk their life trying to cross the border. It rallies against deportations, and offers assistance and safe refuge by supporting the movement of the church-asylum, i.e. the so-called Sanctuary churches.

As the sun scorches and the people start talking to each other, I think of how our borders are sadly similar, how the desert and the Mediterranean Sea have been transformed into weapons of death and dehumanisation. I think about how many other marches we will have to organise, and how we will continue to be outraged. I also believe that as Christians, activists, and free citizens we should not surrender to the injustices that our lifestyle and our choices have contributed to creating. We are there, where we feel uncomfortable, receiving and welcoming the most vulnerable and trying to be in the right place at the right time.

The General Synod of the UCC recently approved a very important motion, which declared the UCC an “Immigrant Welcoming Church, with the aim of also exerting political pressure” explained Pastor Randy Mayer, who has been fighting for the rights of migrants for years, on the USA/Mexico border and who is one of the promotors of the motion. This church’s commitment to social justice, the recognition of the Mediterranean Hope’s work overseas, and the shared battles, make us feel a little less alone in a historical time of strong global changes, displacement of people, perpetuations of injustices, violations and violence.

“There is a river whose streams make glad the city of God”, reads Psalm 46:4 that accompanies this Synod.

We are the flowing streams, we are the waters that do not stop, that merge, change shape, pushed by a stronger force, an overflowing river, and that, in their differences and similarities, try to head in the same direction.