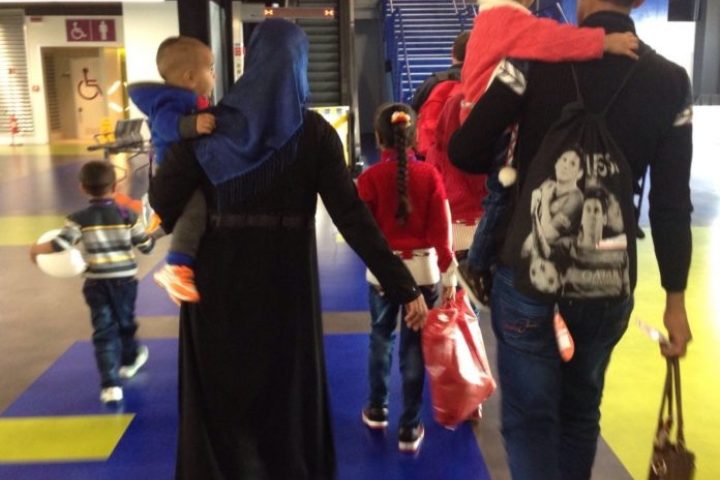 Piero Tasca, Mediterranean Hope operator at the House of Cultures of Scicli

Rome (NEV), 6 December 2017 – The “Lo sguardo dalle frontiere” (A look from the border) editorial is written by operators of Mediterranean Hope (MH), the migration project promoted by the Federation of Protestant Churches in Italy (FCEI). This week’s “look” is by Piero Tasca and comes from Scicli

It’s a “normal” working afternoon. In fact, it is exactly 4pm on a Friday. I am scanning and printing some documents, but…. I feel like I am being observed.

I turn around and from the slightly opened door I see two viscous brown eyes looking at me, following everything I do. I open the door. It’s Muhammad, one of the Syrian children who arrived about a month ago to the House of Cultures through the “humanitarian corridor” project promoted by the Federation of Protestant Churches in Italy.

I invite Muhammad into the office and I see that he is particularly interested in the printer. He looks at it “churning” out sheet after sheet, and tries to make sense of it. Muhammad is 5 years old and was born in a small village near Aleppo, Syria. His parents lived in the countryside and when he was only 4 they had to leave their house because of the war. I surmised that Muhammad’s interest in that strange “tool” was due to the fact that he had never seen one in operation. Muhammad plants himself in front of the printer and does not take his eyes away from the print drawer, waiting for another piece of paper to come out, which he immediately hands to me. I decide to play a little joke on him and, between one document and another, I send a couple of colouring pages to be printed. I notice that his gaze changes. He takes the pages. He turns. He looks at me and starts laughing. He begins “bombarding” me with questions in Arabic that unfortunately I do not understand. He points to the printer and then to the drawings. His eyes are full of amazement and he can’t stop laughing. Laughter that is good for the soul. I go down to the Italian classroom and get some coloured pencils. I give them to Muhammad and he starts colouring in the drawing. After a short while he starts looking at the printer again, and I understand that he is waiting for another colouring page. I send it to print and give it to him. Shortly afterwards other children come into the office, even those who in the meantime had gone down to the hall for a snack. It was also time for me to take a break, eight of us in the office was too many so I decided to go and have a snack with them. The table prepared by our tireless volunteers is filled with fruit, snacks and the inevitable steaming teapot. We start eating our snacks and I try to understand the names of various things in Arabic, asking Muhammad and the others to indicate them to me. They tell me the correct name and I try to repeat it, but… evidently “my Arabic” is very bad because they start to laugh. The children are enjoying themselves by making me repeat things just so that they can smile, and I repeat everything the best way I can and am happy to be able to smile with them. After a while, we are joined by other kids staying at the House of Cultures who eat with us. Between one laugh and another, I intercepted the sad gaze of Mery, a young Cameroon woman who looks at the girls and Muhammad as they laugh and have fun. She is probably thinking about her little girl who will never be able to laugh because she was swallowed up by the sea. For her, the hope of a better future did not pass through the humanitarian corridors, but she had to rely on human smugglers who sent her and her young child among the waves of the sea.

A tear falls from her eyes which she quickly wipes away, and she resumes sipping her tea. I immediately realise that this is also what it means to “live the border.” A border with smiles on the one side and tears on the other. Bitter tears.