That Way from Sabrata to Tripoli 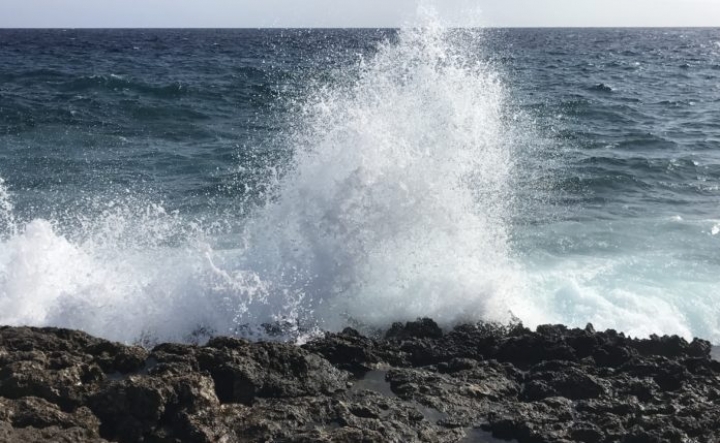 Rome (NEV), December 13, 2017 – The “Lo sguardo dalle frontiere” (A look from the border) editorial is written by the operators of Mediterranean Hope (MH), the project promoted by the Federation of Protestant Churches in Italy (FCEI). This week’s “look” by Tommaso Tamburello and Alberto Mallardo is from Lampedusa.

Youssef loves dogs. We have seen him clapping his hands on the leg and then dogs trotted behind him. Ahmad, instead, loves spending his days fishing amidst the crashing waves without worrying about the cold.

They are both from Morocco. Before shipping to Italy, they have spent six and two months in Libya respectively. Youssef went abroad in search of a job, leaving his wife and his new-born daughter at home. And as we talked, he apologised for giving hazy memories and his words were sometimes confused. « As soon as I arrived in Libya I realized that the Libyan labour market no longer offered past time salary trends.» Youssef said. He hesitated only for a moment, then he confessed that in Libya working as a house painter he was not able to raise more money than in Morocco: just 1500 dinars a month (150 Euro). Getting in trouble with his visa and not having enough money to bribe the border guards, Youssef got stuck in Libya. He found a job in Sabrata, a city in which he had lived for five months until last September. Then, a violent conflict broke out between militias and Youssef decided to continue his pilgrimage in the hope to find a more stable situation in Tripoli.

There are many checkpoints over the stretch of road that goes from Sabrata to Tripoli. And, near one of these checkpoints Youssef was kidnapped, betrayed by a taxi driver collaborating with the militia who had informed about his presence. Youssef was locked in a house between Tripoli and Zawiya, segregated with 9 other people including Syrians, Moroccans, Sudanese and even Libyans.

The men who kidnap him belong to the Warshafana tribe, a brutal militia controlling the territories of Zawiya outskirts. « Explosive attacks, sabotage of public structures, thefts, kidnappings, murders », Youssef told us about the crimes committed by the Warshafana tribe. After a period of reorganisation following the fall of Gaddafi, this violent militia came back to power in the region west of Tripoli. Especially around Zawiya they « were making the worst acts of revenge, including kidnapping, torturing, asking for ransoms, mercilessly for elderly people, women, children and students. »

Youssef could get by after paying a pretty small money – about 600 Euro paid by a Libyan friend who had Youssef released a few days later. Instead, other cell mates were savagely tortured and killed in cold blood within a couple of days since they could not pay any ransom.
Ahmed, one of Youssef’s mate, has only spent two months in Libya. He was lucky not to be kidnapped, perhaps because of the very fair colour of his skin. Despite the short time spent in Libya, he has, however, an idea of the dynamics dominating Libyan everyday life: « In Libya, corruption is extended to all sectors of society: not only are the policemen and officials working in the government’s detention centres corrupt and colluding with the militia, but even the humanitarian workers beat and rob the prisoners of all their belongings. The mafias and the various militias control all the realities of the country in a capillary way, thanks to the huge number of weapons they have – weapons and ammunition stores are everywhere. Many militiamen are often minors and regularly use drugs. These conditions make them even more violent and unpredictable. It is impossible to spend a normal life in Libya, every time you go out for a coffee or you want to take a stroll in the evening you know you can run into a problem, or be kidnapped. »

Youssef and Ahmad think that in the city of Sabrata there are still about 60 thousand people locked in detention centres whose conditions inevitably worsen day after day. Moreover, they argue that the blocking of departures to Italy is only temporary. Once new factions regroup, the departures will start again even with a greater intensity.