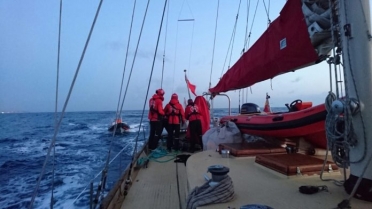 Rome – May 4, 2018 (NEV/CS22) – The Federation of Protestant Churches in Italy (FCEI) and Mediterranean Hope – a Programme for Refugees and Migrants – has continued collaborating with the NGO Proactiva. « This is an action that we strongly support because the rescue of those who risk their lives is at the centre of our evangelical vocation », Luca Maria Negro, the President of FCEI said.

This morning, the Astral, a vessel of the NGO Proactiva has sailed at 5.18 from the port of Malta under British flag. This vessel will operate together with the migrant-rescue boat Open Arms that has been already engaged in search and rescue operations at sea (SAR). Mission n. 45: The Captain, Riccardo Gatti, and a crew of 12 people.

Daniele Naso, MH’s operators on his second SAR mission with the Proactiva, will be on board as a cooker. During the previous mission with the Open Arms, to which participated Francesco Piobbichi of MH, 204 people were rescued.

Two US churches has participated in financing of the MH mission on the Proactiva vessel: The United Church of Christ and the Disciples of Christ Church, a partner of the Waldensian Church. Astral’s activities, as well as the vessels of other NGOs that are present in the Mediterranean Sea, will be supported by the Colibrì, a small propeller Mcr-4S aircraft. Two French pilots, leaving from Haute-Savoie on April 30, Benoit Micolon and José Benavente promoted the initiative. The action is similar to that of another aircraft, the Moonbird, whose activity has been largely financed by the Evangelical Church in Germany (EKD). The support of the German churches to humanitarian action in the Mediterranean and to the reception programmes for migrants is important. In particular, the Church of Westphalia has supported the Humanitarian corridors promoted by the FCEI together with the Community of Sant’Egidio and the Diaconia Valdese. In 2018, the assembly of the German Evangelical churches funded the Mediterranean Hope project and the Aquarius vessel of the Franco-German NGO SOS Mediterranée.

“Mission n.45 for the vessel #Astral that sets sail to the rescue point. Since we are strongly committed, we will continue to defend their lives, while #Med is the border that makes more victims in the world. Buena Proa, crew!” as they tweeted on Proactiva’s profile yesterday morning.