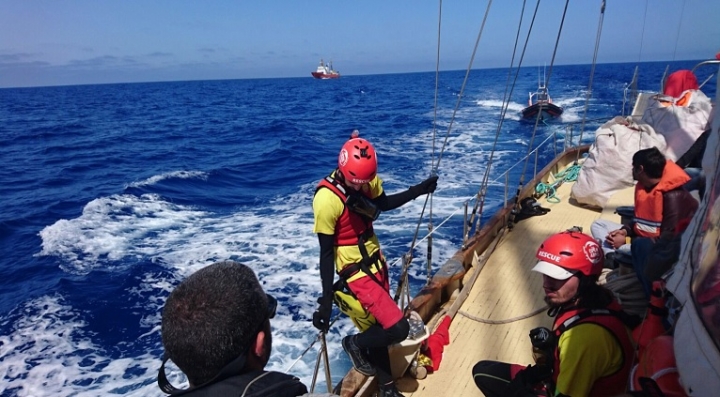 Rome (NEV), 9th May 2018 – “Outlook from the Border” is a feature managed by those working for and collaborating with Mediterranean Hope (MH) – Programme for Refugees and Migrants created by the Federation of Protestant Churches in Italy (FCEI). This week’s Outlook comes from the search and rescue (SAR) zone in the Mediterranean Sea.

When you are at sea everything changes and time is suspended.  Taking part in SAR operations changes the order of things.  There are plenty of ways to talk about our experience with the NGO Proactiva Open arms.  We could change the names and nationalities of those who are fleeing, and the direction of the migrant flow.  We could look back at the history of our continent and say that Segen was a gypsy or a Jew and Oswan an anti-Fascist.  The same cruelty pervades all these stories.  It’s a powerful thing to hear the stories of these people, when they are safe on the deck of this ship, thermal blankets on one side and women singing on the other, children crying and men looking at you with a look that you will never forget.  Here, on this deck, a hug, a greeting, or a word exchanged is worth millions, because these represent expressions of humanity.  Some of these boys look around while they are talking about prison in Libya they are safe but they still have terror in their eyes.  They say that they would prefer to die in the sea rather than return to Libya.

Following our first operation with Proactiva, it was shocking that, having saved hundreds of people, the tugboat Open Arms was chained up for a month in the port of Pozzallo, with a charge of criminal conspiracy to facilitate illegal immigration. This time round, what shocked us was the game of ping-pong between the British and Italian authorities in respect of responsibility for the situation, while 105 people plus the crew were forced to stay on the open sea in extreme conditions aboard the Astral, the boat currently engaged in SAR missions.

“I’ve been struck – and embittered – by all that I’ve seen during these hours aboard the Astral“– says Daniele Naso, who has taken part in two operations as ship’s cook. “It’s an emergency situation which could have been avoided without real difficulty.  Instead, each government has played its part in this absurd theatre leaving those rescued waiting for a day and a night.  Those who set off from Libya and risk their lives at sea aren’t leaving their homes for the holidays; very often they are setting off from detention centres in a poor physical condition.  Children and those who are ill are even more at risk because they don’t stop vomiting.  So it was that the day before yesterday, while the governments were playing ping-pong with responsibility, that a child suffered internal bleeding and began vomiting blood.  To find yourself on board a boat in the middle of the Mediterranean Sea with people who are in need of medical care, with a child who is vomiting blood and governments wasting precious time, doesn’t just make you angry, but also make clear just how little these lives are worth to European governments”.

In these two operations with Proactiva Open Arms we rescued more than 300 people, men and women who bring with them important stories which need to be heard.  Stories of war, colonialism, violence and hope for a better life.  If we listen to them carefully, we find in many of the stories told the same words that our grandparents used, the same sentences that we read in history books.  On the Open Arms and the other boats which save lives, Anne Frank is there too, dark-skinned and seeking international protection.  The same protection which the Jews did not get when they were fleeing from the Nazis.  The same international protection which can be guaranteed thanks to humanitarian corridors.  People are continuing to defy the barbed sea to enable these people to arrive alive and to tell their story.  For as long as it concerns us, we are proud to be part of these stories.