Germany, Rescuing at Sea: The Civil Society and the Churches Dressed in Orange 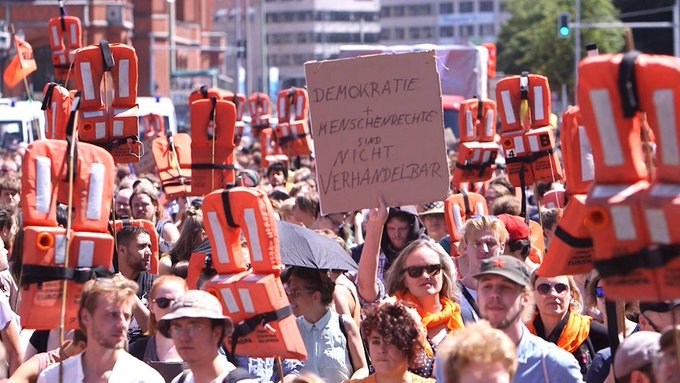 Rome (NEV), July 13, 2018 –We had enough with the indifference towards those who are in search of protection! We say yes to human migration policies! These, in short, are the claims of a petition launched three days ago by three members of the German “Kirchentag” Committee, the biennial event of the Evangelical Church in Germany (EKD).

“As Christians and as citizens, we ask the governments of the European Union to not jeopardize further the protection of refugees. From the churches in Europe we expect the unconditional defence of human dignity, regardless of political agendas – we read in the text of the petition that has already collected almost 35 thousand signatures. And, also: – to not rescue shipwrecked people goes against the international law. It is irresponsible to hold people for months in camps, to pay other states to prevent the arrival of refugees, and to declare as ‘safe’ their countries of origin. “The first signatories of the petition entitled “For a Christian migration policy, based on human rights and solidarity in Europe!” are three members of the presidency of the evangelical “Kirchentag”,  Sven Giegold, the writer  Beatrice von Weizsäcker and the historian  Ansgar Gilster, who are in no doubt about: ” first rights die then men die.”

This petition is supported by the “Mediterranean Hope” – Refugee and Migrant Project promoted by the FCEI. Paolo Naso, coordinator of the MH programme said: “I firmly sign, and I invite all Italians to do so. The rights of all of us are at stake; the credibility of the European Union and relevant values are also at stake “.

In Germany these days there are numerous demonstrations in favour of rescuing at sea. On July 7, 2018 to express solidarity with the NGOs operating over the Mediterranean Sea, thousands of people coloured the streets of Berlin of orange, they took to the streets wearing the orange colour of life jackets.

On Monday, July 16, the head of migration for the EKD, Pastor Manfred Rekowski, will be in Malta to meet the crews of the German NGO “Sea-Watch” and the Swiss “Humanitarian Pilots Initiative”, blocked on the island by local authorities, until counter-order.