Migrants, a meeting in Palermo between the FCEI and the Head of the German Protestant Churches 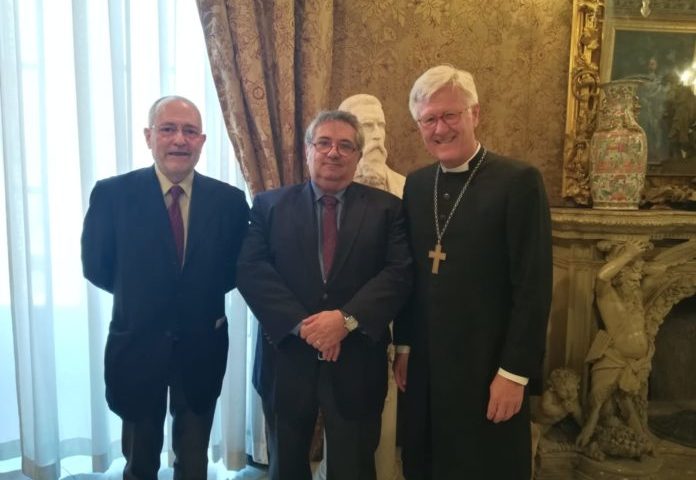 Palermo (NEV CS/28), 3 June 2019 – Today the leader of EKD, Bishop Heinrich Bedford-Strohm met a delegation of Italian protestant churches composed of Professor Daniele Garrone, representing the Council of the Federation of Protestant Churches in Italy and the Waldensian Board, and Paolo Naso, coordinator of Mediterranean Hope, the Federation’s refugee and migrant programme.

The Italian representatives expressed their gratitude to Bishop Bedford-Strohm for the constant material and spiritual support and commitment given by the German churches to migrants and refugees, and put forward three specific proposals: the first is that of the German churches’ commitment to support the European humanitarian corridor project for 50 thousand units in two years, a proposal already put forward by the Italian Presidency of the Council, which provides for different EU countries to take on a quota of asylum seekers, and not only those countries most exposed to migration flows. The second proposal is to create an emergency coordination and crisis unit, i.e. a prompt system for relocating migrants and refugees rescued during humanitarian operations, which would immediately allow them to be relocated, or at least some of them, in other European countries, other than Italy. Finally, the third request was for the support of the German churches in the creation of markets for ethically-certified agricultural products coming from Calabria. The aim is to create a clean and ethical supply chain that will allow Calabrian agricultural producers to pay their workers fairly, and therefore be supported in the acquisition of new markets.

Bishop Bedford-Strohm expressed his absolute interest in these three proposals and guaranteed the commitment of the EKD to put them into practice as soon as possible.

The Italian delegation then accompanied the bishop in the institutional visits to the town hall of Palermo, where he was welcomed by the Mayor Leoluca Orlando and to the cathedral, greeted by Archbishop Corrado Lorefice.

During a press conference at the end of the meeting with the EKD representative, the Mayor said a few words: “Palermo was known as the mafia capital, but that is no longer the case thanks to the protestant churches of this city and in particular, the Waldensian church which was the first to denounce the mafia violence. We would therefore like to thank the Protestant churches of Palermo for what they do every day for the good of the city. So change is possible and today Palermo wants to be the city of human rights.”

“This city,” added the German representative, “is truly an example for the whole of Europe because it shows, as the mayor said, that change is possible. From a mafia city to a tourist city, from a city of violence to a city of human rights. This visit encourages me and I will talk about it in Germany.” As for the situation of migrants, “We cannot tolerate people being drowned, hence our call for a clear mechanism of rescue and redistribution in Europe. We hope it can work and become useful right now.”