Open Arms. The director of the Genoa Protestant Hospital aboard: “The situation is under control but emotionally and psychologically unsustainable.” 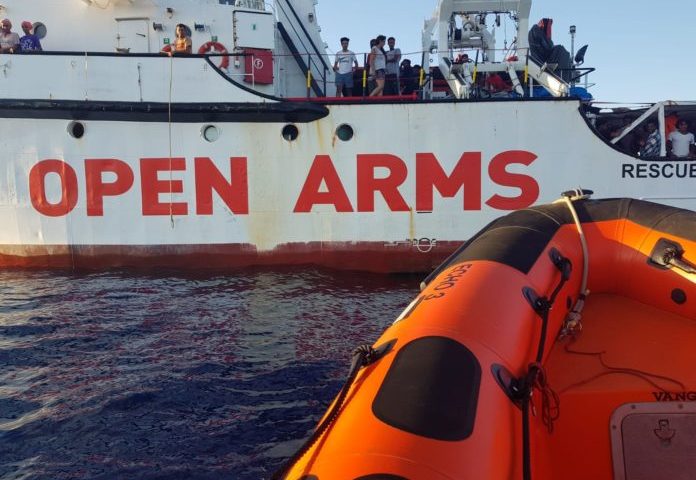 Rome (NEV/CS39), 17th August – within the last few hours Gaddo Flego, 56, chief medical officer at the International Protestant Hospital in Genoa, and Francesco Piobbichi, senior team member with Mediterranean Hope – Refugee and Migrant Programme of the Federation of Protestant Churches in Italy (FCEI), have come aboard the Open Arms moored off the coast of Lampedusa with 131 migrants still aboard.  Whilst they worked together to bring aboard food and essential items, it was obviously an opportunity to assess the situation personally.

“The ship’s bridge is crowded with people,” reported Dr Flego to NEV, the FCEI’s press agency, “and is divided into two areas, one reserved for the men, where spaces are minimal, and the other for the women.  Sanitary conditions are at the limit.  Having spoken to the doctor, the nurse on board, with the emergency psychologist and cultural-linguistic mediators, all have confirmed that, notwithstanding that the most serious cases have been evacuated, there remains a generalised situation of suffering, be that physical or, above all, psychological, which translates into continuous requests for medical help.  The situation is one of extreme variability,” adds Dr Flego, “ and there are moments when distress spills over into panic attacks, uncontrollable crying and desperation”.

The staff of Mediterranean Hope, one of the few organisations with a permanent presence on Lampedusa for more than four years, has sought to provide maximum logistical support to the Open Arms, and, on more than one occasion, the FCEI and Union of Waldensian and Methodist Churches have declared their willingness to take responsibility for hosting migrants, at least whilst awaiting hoped-for relocation within Europe.

For more than a week, Mediterranean Hope staff and activists from the Forum Lampedusa Solidale have been sleeping on the forecourt of the island’s parish church, wrapped in emergency thermal blankets, to protest at the seriousness of the situation of the migrants still on board, and to express their solidarity.  Coming aboard, Francesco Piobbichi – known as the “social illustrator” who, via Claudiana, has published three volumes on the situation of migrants – has brought and distributed coloured pencils and sketch pads.  “This has been my small contribution to easing tension,“ he explains, “and to bringing a little colour and imagination into a dramatic and surreal situation.  And, just for a moment, I have seen some smiles light up”.

“Beyond professional considerations,” concludes Flego, “coming aboard the Open Arms is an experience which has left a highly significant emotional impact upon me.  I have been impressed as much by the stories of those rescued as by the capacity of the crew to guarantee a certain calm and to instill, insofar as possible, strength and hope within people who have been tested to their limits and are utterly exhausted”.