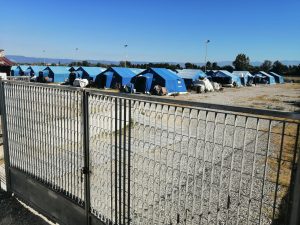 Piana di Gioia Tauro (NEV), 28 July 2020 – “The municipal administration informs guests that the procedures for the final closure of the tent city are in progress […]. Guests are therefore asked to find new living arrangements.” 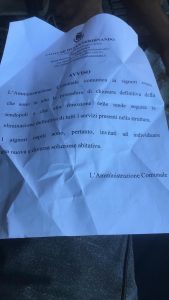 On 24 July 2020, the Municipality of San Ferdinando circulated a leaflet to farm workers still living in the tent city announcing the imminent dismantling of the ministerial tent city created to accommodate farm workers exploited in the countryside of Piana di Gioia Tauro.

Set up in March 2019 following the massive eviction operation ordered by the then Minister of the Interior, Matteo Salvini, in the peak months of the citrus harvest, the tent city officially accommodated over 400 farm workers a day (but the real number was around 1000 people). They lived in poor sanitary conditions, and no preventive or health screening measures were taken by the institutions during the months of the COVID-19 health emergency. On the other hand, the associations and trade unions present in Piana have for years been asking local and national institutions for an organic and interinstitutional plan to combat labour exploitation and to promote the social and housing integration of labourers in a territory with a high rate of depopulation.

As has been repeatedly highlighted by the various signatory associations and by the recent report published by Medu – “The pandemic of Rosarno” – seasonal workers who flock to Piana for the citrus harvest are young men with an average age of 30 years and in 90% of cases with a regular residence permit. The social marginality and precarious living conditions in which they are forced to live come from the severe exploitation of labour to which they are subjected. Needless to say that two thirds of assisted labourers in 2019 stated that they have an employment contract but only one in ten receives a regular paycheck. The daily wage, in all cases, is between 25 and 35 euros and almost all workers encountered said they are paid for a much lower number of days than those actually worked. The shame of the ghettos can only be overcome by combating labour exploitation through the adoption of systemic measures that can no longer be postponed.

The signatory associations ask what housing alternatives are planned for these people who will inevitably return to the territory in the next citrus harvest season, as has been the case for more than ten years. Yet another transfer to the primary and secondary reception centres (CAS and SPRAR), already attempted in the aftermath of the March eviction and which proved to be a complete failure, would represent another missed opportunity and an unnecessary cost for the community. The associations are asking for an indication of the measures that the institutions intend to take to strongly oppose exploitation and to finally promote decent living and working conditions for foreign labourers and the inhabitants of Piana.

Mediterranean Hope, migrant and refugee programme of the Federation of Protestant Churches in Italy