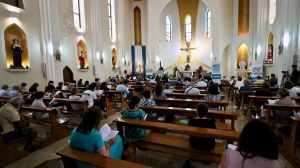 Saturday 3rd October, on the island, a moment of ecumenical contemplation, organised by the parish and by the Federation of Protestant Churches in Italy (FCEI), heartfelt and supported by locals, NGOs, the Forum Lampedusa Solidale and survivors of this tragedy.

Rome (NEV), 5th October – A low-key but heartfelt moment of ecumenical contemplation was organised by the Federation of Protestant Churches in Italy (FCEI) and San Gerlando parish on Saturday, 3rd October, on the anniversary of one of the worst shipwrecks in recent years. Fully respecting the anti-Covid measures, this year the commeration took place within the local church and saw the participation of many of the island’s citizens, the Forum Lampedusa Solidale, and representatives of the NGOs which are engaged in search and rescue (SAR) work.

Paolo Naso, coordinator of Mediterranean Hope, reminded all of the importance not only of commemorating the dead but also of committing ourselves to the living, of continuing our work so that there can be no repeat of tragedies like that in 2013, until such time as humanitarian corridors become systemic within the European Union.

“On this tragic night of 3rd October 2013,” said Marta Bernardini, Mediterranean Hope team member, “368 people died, engulfed by the sea and by our unjust laws. But that night other lives were saved by others on the island.  People who recognised the value of the lives of others, who did not hesitate to stretch out a hand to save brothers and sisters from the very same humankind.  Amongst them Vito Fiorino, who participated in the service by speaking about his own experience, together with five survivors from that night.

During the course of the ecumenical commemoration, facilitated together with Don Carmelo La Magra, there were some Bible readings.  Some verses from the Old Testament were followed by a reflection from Daniele Garrone, Waldensian minister and theologian, whilst verses from the New Testament were discussed by the Bishop of Agrigento, Mons. Francesco Montenegro.

Various voices spoke during the commemoration, in which the staff and volunteers of Mediterranean Hope present on the island took part.  You can read the complete liturgy here.

FCEI vice-president, Christiane Groeben also participated.  The Protestant delegation, in recent days, also visited the island’s cemetry and other symbolic spots linked to issues of migration on Lampedusa, such as the hotspot zone and the Gate of Europe designed by artist Mimmo Paladino.

In the chancel of the church on 3rd October, the MH team created an installation: “representing the tree of living memory signifying the present, its roots sunk in the rock of a society hardened by indifference and selfishness.  It is a tree bent by the frozen wind of hate, rising from a rock, which does not give way to the waves of the barbed sea, but resists; which does not snap but grows and is nourished by human solidarity.  And it is the tree which we all take care of, because it permits us to restore dignity to those who have lost their lives at sea, and to affirm that all lives have value,” they explained.

At the close of the moment of contemplation, everyone present laid a stone at the foot of the memory tree, “as in the Jewish tradition when one visits a tomb and leaves by way of memory, a stone”.