Lebanon, “We won’t turn out the lights” 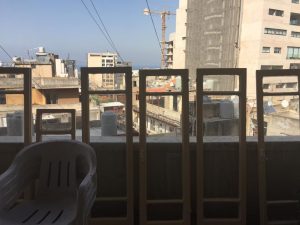 Rome (NEV), 14th October 2020 – Little more than two months have passed since the explosion which devastated Beirut’s port this summer. “But in recent weeks we hear less and less being said about what is happening in Lebanon when, in fact, it would be better not to turn out the lights”, says Silvia Turati,a member of the team at Mediterranean Hope, the migrant and refugee programme of the Federation of Protestant Churches in Italy, in Lebanon to continue the humanitarian corridors project.

Meantime, the Covid 19 health emergency has reared its head once more.  The day before yesterday, according to a report from news agency Ansa, the Lebanese Minister of the Interior ordered a one-week lockdown for 169 villages and areas within the country, and ordered the closure of bars and nightspots throughout the country.    These measures should remain in place until 19th October, whilst bars and nightspots will stay closed until such time as a new order is issued.

“The situation is extremely difficult,” confirms Turati, “and in various districts other explosions have been confirmed in which people have died as a result of flammable material and gas cylinders being stockpiled.  Basic items are running out and it is likely that within the coming weeks, so too will essentials.  As a result, since September, FCEI’s refugee programme has been undertaking new activities, specifically to help the Lebanese population.  We are collaborating in various local initiatives and busying ourselves primarily with distributing meals and medicine.  Specifically, it is extremely difficult, or actually impossible, for many to access drugs and we are therefore supporting a pharmaceutical station in the Geitawi district”.  It’s here that the “Nation Station“ solidarity project has grown up, another to which MH is contributing, primarily through the commitment of Irene Vlad, FCEI team member, who has worked as a volunteer with the project since its inception in Beirut.  Many houses in this district are still in a state of destruction and citizens are doing their best on their own to reconstruct and make secure these buildings.

Whilst working to guarantee the next humanitarian corridor – the final group under the current protocol, initially envisaged for last March – MH staff are also moving forward Medical Hope, together with doctor Luciano Griso. “We continue to visit people who are particularly vulnerable from a medical and health perspective.  Unfortunately, for these groups, the economic crisis arising from Covid has had a very negative impact; they are without medicine and treatment,” continues Turati.

The distribution of funds allocated by FCEI to which the Waldensian Board contributed , deriving from the appeal launched immediately after the explosions last August is now almost at an end.