Tragedies at sea, corridors to expand, laws to correct 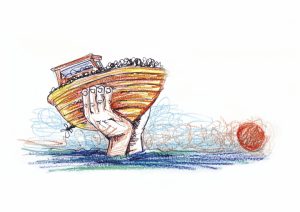 On 3rd October 2013, a few miles from the coast of the Island of Lampedusa, a boat loaded with migrants from the Horn of Africa caught fire.  One of the most tragic incidents in the history of Mediterranean migration, heightened by the images of coffins lined up in the airport hangar and the tears of the 141 survivors, all so young, if not minors, who saw their dream turned into tragedy when Italy and safety seemed within reach.

As has happened so many times, these images left a mark and, in a still corporate climate, still safe from nationalistic propaganda and from the destructive fury of consitutional law on asylum and on the moral laws of sea rescue, the government decided to institute 3rd October as a national day of remembrance for victims of immigration.

A date is not enough to change consciousness.  Holocaust Memorial Day has not uprooted the seed of antisemitism just as the 2017 law which instituted the day of remembrance for mafia victims has not eradicated organized crime.

The merit of these “days”, if nothing else, is that they generate public reflection on the decisive themes of social coexistence and, in fact, put two distorting factors – repetition and rhetoric – to the test.  A day which recurs in the same fashion every time loses its interpretive efficacy, just as an ordained feast day loses its capacity to trigger questions, feelings and reactions.  The other factor is rehetoric, which remembers the dead but forgets those who are living today.  And that is at risk of happening on 3rd October this year.

If we are to look at laws and facts, there has been no substantial change since that time: the pressures to emigrate from certain parts of Africa and the Middle East remain the same, as does the lack of legal pathways which guarantee protection to asylum seekers or those migrants we define as “economic” but who are fleeing in desperation from areas of poverty and conflict which put their lives at risk to precisely the same extent as a civil war or a bloody dictatorship.  The only real change since that time has been the opening of “humanitarian corridors” which, it’s worth remembering, were conceived and realized in direct response to the tragedy of 3rd October.  The protagonists of this experiment – the Federation of Protestant Churches in Italy, the Community of Sant’Egidio and the Waldensian Board, are still committed to this project and have also sought to propose this at a European level.  It is an ambitious objective but there has been some positive feedback from the European Commission which now recognises that to tackle “irregular” migration effectively, safe and legal channels need to be opened both for asylum seekers and for economic migrants.  However, humanitarian corridors still remain an example of good practice, an excellent experiment and have yet to become a policy recognized and affirmed by European law.

On the day to be celebrated on 3rd October, the risk of well-meaning empty rhetoric is real if the declarations and suchlike are not accompanied by concrete action.  For example, approval of the new decrees substituting those laid down by the former deputy prime minister Matteo Salvini.  They had promised “security” but, in reality, produced the opposite effect, making thousands of migrants more vulnerable, taking away their legal status and destroying a system of interaction which, beyond reception, fostered social inclusion of migrants.  These decrees made migrants less safe as they lost the liferaft of search and rescue action by NGOs.  In the context of migration, security is indivisible; it is for all – Italians and immigrants – or it is not security.

Approval of the new decrees “superseding” the Salvini law would have been a strong signal, the antithesis of mere rhetoric, which would have restored to 3rd October a sense of commemoration worthy for today and not only for the past.  A missed opportunity but also a stimulus to think about a tragedy seven years ago which, with even higher numbers, has repeated itself on other occasions and which, as matters stand, could repeat itself again tomorrow.