There Is The Alternative: Humanitarian Corridors 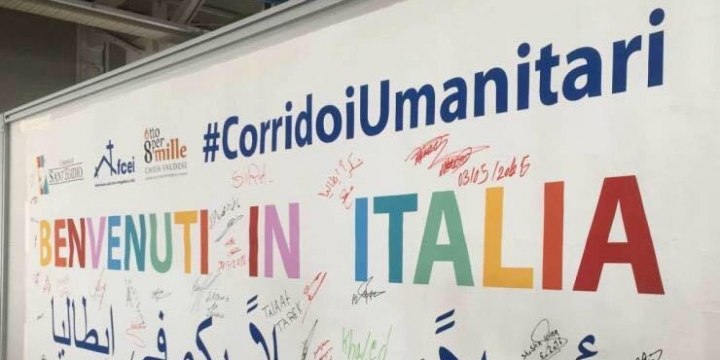 Beirut, Lebanon (NEV), June 15th, 2016 – I left Lampedusa – in my mind the two women suffering burns caused by petrol. They were holding hands to remain strong inside an ambulance at Molo Favarolo. I left Lampedusa and I had still in my mind those who had just landed the boats of Capitaneria di Porto kissing the ground and thanking God. The two burned women, wrapped in white sheets and half-naked arrived first, then the other migrants, hundreds of them, all wearing the blue overalls of the tanker vessels that had saved them. I thought about that people while flying to Beirut watching that terrible Mediterranean Sea in which thousands of people drowned over these years. Beirut is far from Lampedusa. Few are the Lebaneses who know Lampedusa and even less the refugees that were interviewed by us to access humanitarian corridors project.
The few Syrians that I have seen in Lampedusa arrived wet, barefoot without luggage. The relationship between saved and rescuers is never equal. The first ones rely on the second ones and they often lose their dignity. In Lebanon it is not this way: those who want to reach Italy through the humanitarian corridors can exercise a right and choose which route to follow, that means to remain in Lebanon living extreme vulnerability with no hope or make a change leaving everything behind in search for a new life. The choice is not easy, anyway.
I have seen them crying before leaving – maybe our grandparents did the same before going to the Americas, waiving and hugging neighbours and relatives. We can fell their fears and understand them without judging.
In Lebanon, I have understood that war and misery are joined together in the camps of Syrian and Palestinian refugees and in basements and attics – an invisible fence that does not leave much hope. In Lebanon people perish because there is no access to treatment and no public health as in the most of the Middle East countries. People perish because they have no money, they get sick because there is no prevention. Women and children are the most vulnerable ones. We enter the homes or the tents in which they look at us with curiosity, some of them still smiling, others anymore. In this work, it is impossible to escape the sorrow and avoid narrating it, unless loosing sensitivity.
We would need a new Marshall’s programme. I feel angry when I hear “let’s help them at home”, not because it is a meaningless statement, but because there is not such support. Last month we took a stroll among the tents in a camp and we were overwhelmed by poverty and disease. In such a framework a feeling of helplessness and weakness grows. There was a young Syrian mother, who was dying in a tent and we could not help but give her few dollars to get back and die in her homeland as she could not afford chemotherapy. The war made her escaping from home and the death has brought her back. In Lebanon we can understand why this humanity land in Lampedusa, why so many men and women risk their lives and their children lives.

I now understand what it means “we are not afraid of dying at sea because we have been already dead on the earth.” I have heard it in the forest of Ceuta and Melilla, in Lampedusa and here in Lebanon.
After the toll of October 3rd 2013, the FCEI (Federation of Protestant Churches in Italy) with the Mediterranean Project Hope has decided to work and give a real answer to this great tragedy that characterises our time. Two years later, the FCEI with the humanitarian corridors proved that there is an alternative. Now, it is time to move from the test phase which have been promoted by our civil society and reach a structural policy of the European governments.