Isaiah 61:1-3 is an encouragement to keep hoping in a world where we can struggle to see any hope at all. On a recent visit to Lampedusa, Italy, I needed to hold onto these verses more than ever as I came face to face with the pain and despair of migrants risking their lives trying to get to the shores of Italy.
On October 3 2013 a boat carrying migrants from Libya to Italy caught fire and sank half a mile off the Italian island of Lampedusa. Originally from Eritrea, Somalia and Ghana, the migrants were fleeing torture, unlimited conscription and poverty. Smuggled at great personal and financial cost to themselves and their families back home, they were desperate for a better life in Italy. Most didn’t make it and died tragically in the waters half a mile from safety. In total 368 people perished; there were only 155 survivors.

The Federation of Italian Protestant Churches invited me to Lampedusa where they have set up Mediterranean Hope, a social and humanitarian project set up in response to the tragedy of 2013.

An ecumenical commemoration service to remember the victims of the tragedy was all the more poignant because of the presence of a small group of survivors from the tragedy (who have since gained asylum in Europe). They return every year to commemorate the day, all having lost someone close to them that day, be it a family member, spouse or friend.
All over the island there are reminders of the tragedy or of the deaths of others trying to reach Italy. A ‘boat graveyard’ is located next to a modern harbour, the smashed wooden tubs, the remnants of boats that have made the crossing.

There is an area known as “Porto M” which houses an exhibition of objects belonging to migrants. Used and abandoned milk cartons, pots and pans, torn and creased bibles and Qurans, baby feeding bottles, clothes, magazines etc keep the memories of the victims and the tragedy alive.

There is the cemetery of Lampedusa where families have offered spaces within their own grave plots for migrants who die trying to reach Italy. Some carry names, others who the authorities have not been able to identify, carry numbers.

Then there is a reception centre called a “hotspot” in the countryside with no public access where those migrants who arrive successfully are housed until their asylum application can be processed.
So where was hope to be found here and where was the “beauty from ashes” amidst the pain I witnessed and heard about?

I found it in the passion and actions of Mediterranean Hope (MH) who act as observers to track what is happening and engage with the whole of the island community, working tirelessly to welcome migrants and refugees to Italy. MH has also been allowed unprecedented access to the harbour area when migrant boats arrive to hand out drinks and provide a welcome. Read about the other work they are doing around Italy and further afield in Lebanon and Ethiopia here: www.mediterraneanhope.com though it may help if you speak Italian!

I found hope in MH’s latest project – “Humanitarian Corridors,” the first one of its kind in Europe that uses European legislation to grant visas to vulnerable refugees and migrants for humanitarian reasons or because of international obligations. To date 300 people, mainly from Syria, have benefited from the Humanitarian Corridors initiative. However, in future they envisage thousands more coming, not only from Syria, but also from sub Saharan countries via Morocco including Eritreans, Somalis and Sudanese.

I found hope in the spirit of the Lampedusan people who have taken the tragedy of 2013 to their own hearts. There is such a feeling of friendship and welcome towards those who arrive on their shores, fleeing persecution and conflict, looking for a better life.

I found hope in meeting a representative from the solidarity group on the island and hearing about their efforts to identify those who die trying to get to Lampedusa in order to give them some dignity in death.

I found hope in the young Syrian couple I met, who having benefited from a “humanitarian visa” now live in Turin Italy. Despite the pain they have witnessed and the obvious scars they carry they have hope for their future.

There is much work to be done to prevent the continued tragedies occurring in the Mediterranean and to show compassion to those arriving in Europe, but at Mediterranean Hope I glimpsed some beauty amidst the ashes, the oil of joy instead of mourning, and a garment of praise instead of a spirit of despair. 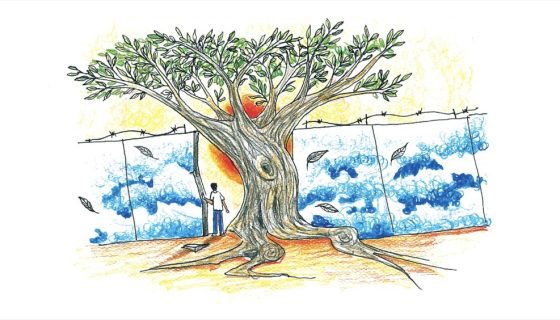