The Odyssey of November 3rd – Chronicle of a Shipwreck 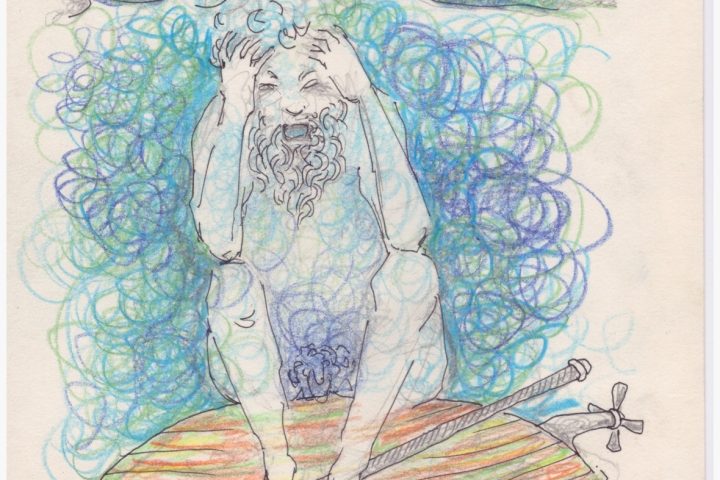 by Tommaso Tamburello, volunteer at the MH’s Observatory in Lampedusa

December 5th, 10.30 AM. It was raining while taking place, inside the church of San Gerlando, the commemoration for the victims of the shipwreck occurred between November 2nd and 3rd off the Libyan coast. The migrants who perished had set off from Tripoli on a risky boat and sailed with stormy sea. They were 147 men, women and children, mostly from Cameroon, Guinea, Ivory Coast and Mali. Only 27 of them survived, 23 participated in the ceremony to commemorate their fellows, relatives, friends and strangers, who died in the middle of the Mediterranean sea; the other four survivors are women – the only women who survived, and they have already been moved to another centre in Sicily. Don Carmelo, the parish priest and some residents from Lampedusa (citizens, members of the Solidarity Forum Lampedusa, the Mediterranean Hope operators and other entities that have been working on the Island) took part to the commemoration along with these 23 young and valiant African men.

The spokesmen for the group of survivors are Stephane and Steve, Cameroonians of 26 and 37 years, whose attitude and the way they speak French suggest that they are learned people (Stephane graduated in Logistics at the University of Douala, Cameroon). We had met Steve and Stephane few days before when, during the Internet Point sessions which are run in our office, we found out that they were on the boat shipwrecked just a month before. When we asked if they could remember the names of some of the victims, and if they wanted to tell their story they immediately accepted without hesitation, and we agreed to meet again the following day for a short interview. The result was a forty-five minutes harrowing narrative; the story of men, women and children to whom the fate inflicted the most terrible sufferings that a human being could experience over a lifetime in just 24 hours.

This journey has a background: That is another journey which is important to understand the dynamics of what happened next. The protagonist of this background story is Stephane and this story began exactly a month before the accident, the night of October 3rd when he embarked for the first time from the beaches of Tripoli to Sicily. The starting conditions were the same that would have occurred a month later, those conditions in which every month thousands of people are forced to leave under the coercion of arm: rough sea and a boat damaged in several parts. That night, the boat did not sail many miles from the coast since it immediately began to take in water, despite repeated efforts by Stephane and the other men to empty the water from the boat by means of buckets, Efforts which, as reported by Stephane, did not prevent the boat from sinking causing the death of 11 people: 8 women, 2 babies and one man. The day after at dawn, the Libyan fishing boat that found the survivors took five hours to get them on board using the nets; then, those migrants were brought back to shore where the immigration police was waiting as well as the hell of a Libyan cell. As everyone knows, hunger, thirst and daily beatings with clubs and sticks have characterised the stay of these people in any Libyan prison, where a strong racism towards the sub-Saharan Africans is a widespread phenomenon like all the other countries of North Africa. Stephane had been in prison for three weeks but thanks to the help of other inmates he escaped. He could escape also the bullets of the guards unlike two of his companions that fell to the ground after being shot. Stephane succeeded in reaching the house used for the first journey and in which his coxeur was living (coxeur is the trafficker who organise the trips at sea.) There, Stephane found out that his name had been included in the list of people who had reserved a place on the following trip.

On the evening of 2nd November, once reached the beach Stephane faced again the same dramatic moments of the first time: rough sea, a damaged vessel taking in water just landed on sea and the Libyan weapons directed to the passengers to avoid any attempt to renounce to what seemed going straight to a certain and horrible death. Stephane said: “The experience I gained after the first trip allowed me to save at least some people. During the first crossing with a stormy sea, men ended up crushing women, which were weaker, since they were shunted to and fro by the boat that was out of control. Eight women died this way.” Thanks to this experience, on November 2nd, Stephane was able to keep calm and manage on-board operations. Firstly, he moved women and children on one of the boat sides to avoid them to finish crushed by a hundred of heavier men; then he could free from passengers the areas of the hull on which there were holes to empty the water more rapidly and more effectively. But, when the vessel became too damaged Stephane and the others migrants were exhausted and they could not prevent the vessel from taking in water and broke causing the death of most of the passengers. Fortunately, their incessant work of drainage made the boat sail enough to reach an Italian fishing boat and the subsequent rescue on the morning of November 3rd.

Going back to the evening of November 2nd , I will try to narrate from the beginning the odyssey of Steve, Stephane and their companions, just as they told us and using their own words since it has been an extraordinary testimony of the tragic events that nowadays too often occur and too often are not worthy of attention.

At that time, it was noon. After fourteen hours of crossing and bad weather, the group, which initially had 147 passengers, reduced to 30. In an effort to get on board the fishing vessel other three people died: being too weak to climb the rope they fell into the water, where they drown because the current and the waves. Soon arrived the Frontex’s vessel which boarded the survivors and fed them with water and energy snacks as well as healing the severe burns caused by fuel.

During the recovery of the bodies in the water, the Frontex’s divers found two women still alive after being tossed into the water at six in the morning. Incredibly, they had survived for seven hours in the frozen sea, remaining clinging to floating bodies – one of them would tell later that had remained for hours next to the floating body of her baby before the current dragged it elsewhere, away from her. When I asked Stephane and Steve if any child had survived, they shake their heads, stating categorically that no child would have survived that journey. Later, the survivors were taken to Lampedusa, where they received medical care and psychological support, waiting to be transferred to Sicily.

Going back to the beginning of this story, on December 5th, it was held the ceremony to commemorate the victims of that shipwreck. The speech written by the survivors that Stephane has read in the church to commemorate those who perished, was touching and something rarely for this type of situations, the survivors called on the religious institutions and the Italian Government to start an investigation to the shed light on the responsibility of all those deaths. We have asked to start an investigation and a criminal proceeding against human traffickers, who gain tens of thousands of Euro whenever send hundreds of people to certain death by boarding them on those boats that are real death traps. Stephane then turned to his dead companions: “Warriors, together with you we fought; we could all die, but God wanted us to survive and witness what happened. Have no doubt that you have not been weak when, from 3 to 6 AM that morning, the situation became much worse. I have rarely met people so valiant, whose pride glows like a stormy sun. History will make justice.”
At the end of the speech, a call and a warning to their African brothers, “We take this opportunity to warn our brothers from the danger of this trip, because every year Africa loses too many men and women in this exodus. And the situation can worsen if we Africans do not take consciousness of these risks.”

Then, the ceremony ended with a statement of the names of the victims, unfortunately, not everyone, but only those that survivors could remember and write down on a sheet, – about forty in all. A suffering applause and a minute of silence with all the participant in a circle in the square opposite the church, have closed this morning of condolences.

Sadly, this story of pain, death and cruelty is only one of many that have been constantly repeated a few steps away from our shores; But these 27 warriors told their story, which is also and above all a story of courage, strength, dignity, love and hope. Hoping that their tragedy does not end up in oblivion and their commitment can be an example for those who have experienced the same horror, and who will live it in the future. Finally, we hope that narrating what occurred on November 3rd will help to awaken the conscience about the migratory phenomenon of recent years whose consequences are one of the greatest tragedies of our time.

Here the Facebook page link that was started and managed by the survivors, “Les victimes du November 3 en Méditerranée”:
https://www.facebook.com/Les-victimes-du-3-novembre-en-mediterran%C3%A9e-1346548255390045/?fref=ts