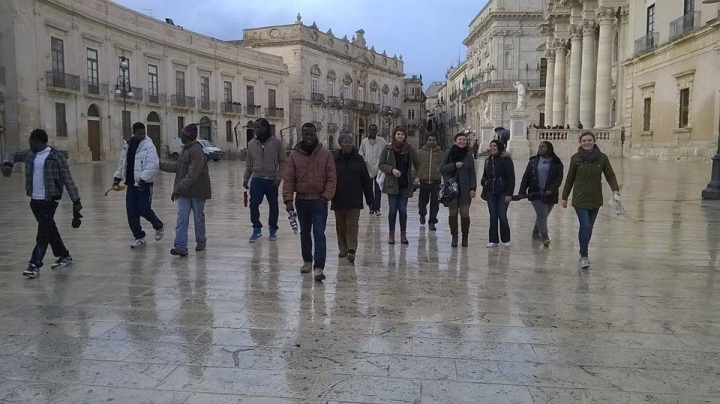 NEV – by Ivana De Stasi, Mediterranean Hope staff at the House of Cultures of Scicli

Scicli, Ragusa (NEV), 14 December 2016 – I hear my name being called, I turn around. It’s Eric. Besides my name, he can’t say anything else except “beaucoup, beacoup des personnes!” I try to ask him what happened, but nothing, this time he can’t even speak. He gesticulates with his large hands as if to emphasise the fact that something big has happened, it involves many people, but it is unclear where and why. He takes me by the arm and drags me outside the Casa delle Culture (House of Cultures). On the way, he starts indicating in the direction that leads to the large square of Scicli called “Piazza Italia”. “Beacoup des personnes!” I once again ask him to clarify and he finally begins to explain.

That morning – a hot and sunny Sunday, although it was already late November – Eric woke up early. He calmly had breakfast and with the same tranquillity had a shower. He put on some clean clothes, his best. He combed his hair, bringing it all towards the centre to create a sort of crest. I don’t find it very nice-looking, but it is very popular and fashionable among the boys. It is about 9.30 in the morning, and Eric walks down the stairs towards the street. He walks along a section of Corso Mazzini and then turns into the alley leading to Piazza Italia. To the left is the Parish Church of Scicli, which is home to the Madonna delle Milizie, who saved the population from the Saracen invasion, and today is the objective of Eric’s day. A few days before, Eric asked me where the nearest church to the House of Cultures was. I thought he was Pentecostal since almost all the Christian youths who arrived belonged to that religion. When I showed him the small Methodist church in Corso Mazzini, he asked me if it was a Catholic church. Eric told me that his father is Pentecostal but his mother is Catholic and, in Cameroon, he had always followed both rites, but he felt more Catholic. He is very proud of this. Even during his stay in Libya, he proudly defended his beliefs even though he was surrounded by people who had converted to Islam.

The religious issue is a very interesting and delicate matter to address in a context like that of the House of Cultures, which brings together many young people from very different social-cultural backgrounds. What immediately fascinated me was the religious complexity – and at times even the apparent contradictory nature – that Africa holds. On the one hand, it is a continent where syncretism and religious flexibility reign – many children have parents of different religions, Muslim fathers, Catholic mothers, a marriage almost unimaginable in our European societies. On the other hand, instead, they are reluctant to deal with religious realities different from their own. In this regard, I will never forget something that occurred during a walk through the streets of Scicli. I asked the kids to enter one of the many churches of the town. Some were against it, saying that it was forbidden for a Muslim to enter a church. After clarifying our respective positions, a young boy decided to enter. The others followed a few at a time. So, after that church, we decided to visit others. The young boys were excited. They were left open-mouthed admiring the statues, painted ceilings, the majesty of each church and they understood that a place of worship is interesting regardless of one’s personal religious history. Eric, instead, is waiting for next Sunday to arrive, so that he can attempt to enter the church again, trying not to be frightened at the sight of so many faithful!