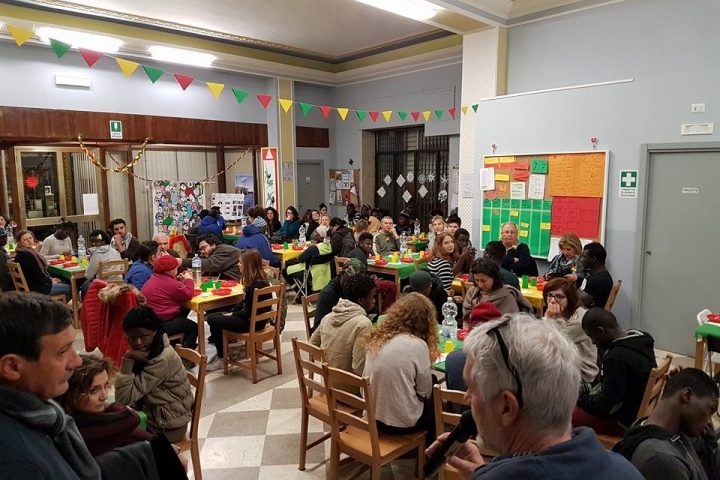 by G. Filippini, MH operator at the Casa delle Culture of Scicli

Rome (NEV), 15 February 2017 – One of the guiding objectives of the Casa delle Culture (House of Cultures) of Scicli is the knowledge of the world we encounter every day, driven by war, desertification and desperate poverty. It is a world that asks, but one that also gives a lot. The channels of mutual knowledge pass through stories, music and…. food. This is how the “Sapori del Mondo” (Flavours of the World) meetings began, a series of events focusing on the African food culture.
The colourful country of Senegal is the protagonist of this first event. The development of the event began almost by accident. It was born in a street market after learning about Mirella, a Senegalese woman perfectly integrated into the community of Scicli. We asked her to guide us in this first journey. She accepted with enthusiasm and we involved the small Senegalese community of the city. Over time, this integrated nucleus and the city have created a relationship of mutual respect and friendship.
Our kids were involved in the preparation of the hall. With the help of volunteers, they set up a small workshop which was in charge of making the hall of the Casa delle Culture not only colourful but above all friendly and welcoming. They prepared festoons and place holders, they planned the layout of the tables, set them and selected the music for the evening. The colours of the Senegal flag dominated: yellow, red and green. Erica and Mauro, operators of the domestic area, set out in search of the ingredients indicated by Mirella for the menu. The day of the dinner arrives; the kitchen has been abuzz with activity since the morning. Two typical rice dishes are planned. Mirella is hard at work with two of her friends and our boys, who are supervised by Erica. Despite the huge quantity of work, the atmosphere is serene and festive, the scent of the food begins to spread throughout the house. Meanwhile, preparations get under way in the hall, 90 diners are expected to arrive, a number above our expectations.
At 8:30pm we open the “restaurant” and welcome our guests. There are many friends, but just as many people who have never been to our House. This presence adds value to the evening. It is the 27th of January, the Holocaust Memorial Day, and we cannot and we don’t want to dispense ourselves from briefly remembering the greatest tragedy of the last century. One of the guests asks for a minute of silence to remember the victims.
We sit down at the tables, the key word is “mélanger” which means let’s mingle, let’s get to know each other, we’re here to be together. And “mélanger” works: while we eat, we talk, laugh and get to know each other. The evening passes pleasantly, the Senegalese dishes are a huge success. We are also joined by the people from ANFASS (Association for children with disabilities and their families), their smiles and curiosity make these moments even brighter. There is the Senegalese community who proudly appreciate the evening that was dedicated to their country. We are at the end of this first culinary event, and there is a small exception to menu: typical sweets of Scicli prepared by Enrica. Today is her birthday and it is another small party within a party, this is also “mélanger”! The evening concludes with a tribute to Mirella, her staff and all those who contributed with ideas and work. Through taste we have discovered the pleasure of knowing each other, of being together and continuing to travel.