Humanitarian Corridors: The Figures of The Protestant Reception System 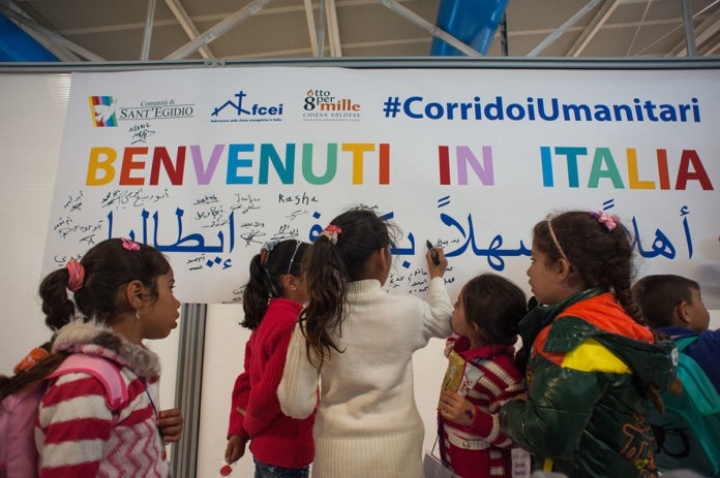 Rome (NEV), April 27, 2017 – With these new arrivals, the eighth humanitarian corridor between Italy and Lebanon was carried out thanks to the support of the FCEI, the Tavola Valdese and the Community of Sant’Egidio. The first arrival dates back to February 4, 2016: the family of the little Falak reached Italy safely by regular scheduled flight. Two weeks later the first large group landed. Since Last February, 13 flights Beirut-Rome have brought 8 groups of refugees – mostly Syrian – to Italy, for a total of 791 people.

But who are the beneficiaries of the “humanitarian corridors”? And where did they find hospitality?

On December 15, 2015 by signing the Memorandum of Understanding, in compliance with the Schengen Treaty the Italian Government undertook to issue 1000 humanitarian visas over a period of two years. The same memorandum stated that the promoters would pay for the reception system.

THOSE WHO ARRIVE – The Memorandum of Understanding identifies several areas of possible intervention, but to date the beneficiaries of the humanitarian corridors are almost all Syrian citizens coming from Lebanon refugee camps. As a sole criterion, the project has considered the vulnerability of the rescued person. This is the reason why every group that land Italy is highly heterogeneous: from a religious point of view (Christians, Shiite Muslims, Sunni Muslims, Alawits) and geographic origin (Homs, Aleppo, Hama, Damascus …) as well as their social background. There, the beneficiaries’ lists are drawn up by the Italian consular authorities (the Italian embassy in Beirut works closely with the project operators). Those who reach Italy via these corridors are identified people, who not only have arrived safely but also legally.

THOSE WHO WELCOME – On the Protestant side, the reception is organised by the FCEI – as a part of the Mediterranean Hope Programme and the Waldensian Diaconia (CSD). Being housed in flats or small collective reception centres that are located throughout the country, the beneficiaries of the first 7 groups who entered the Protestant structures are 204 and most of them live in Turin. As per this project purpose, the families are primarily welcomed (134 against 19 singles), minors (42%) and young people between 19 and 30 (25%). In addition, the Protestant reception detects almost parity between the number of men (54%) against those of women (46%).

THE BENEFICIARIES – Unlike beneficiaries of resettlement programs – who have already been granted refugee status at the time of their entry into the resettlement country – beneficiaries of humanitarian corridors must apply for asylum once they have reached Italy. In order to make them as autonomous as possible, the FCEI and the Diaconia Valdese have been supporting the beneficiaries in their integration path by offering, over a proper period of time, legal and psychological support, social and inter cultural mediation, health care, intensive language courses for children and adults (18 hours per week), support for school and work placement. All school children were included in the national school system. Within the first year of activity, FCEI and Diaconia’s guests managed to get 2 contracts for an indefinite period of time, 1 call work contract, 8 internships, 6 vocational training courses, 1 enrolment at the university. To promote the work inclusion of their beneficiaries, the FCEI and the Diaconia Valdese have entered ad hoc agreements with the Adecco Foundation for Equal Opportunities and with the FLAI-CGIL syndicate.

THOSE WHO PAY THE COSTS – The economic resources on which the FCEI and the Waldensian Diaconia can count for the organisation of their reception are primarily from the eight per thousand of the Union of Methodist and Waldensian Churches. These are structural funds that over time combined the generosity of some churches such as the Westphalia Evangelical Church, the Swiss Evangelical Church (HEKS / EPER), and the Church of Scotland. The humanitarian corridors also have the support of several Italian and foreign churches as well as the free donations of single entities or individuals willing to participate in this reception pilot project.

Being first in Europe, the ecumenical project of “humanitarian corridors” has shown that there is a possible and sustainable way to migrate through safe and legal path. In March, the French government has signed a similar agreement with Protestant and Catholic organisations and churches and this happened on the wave of the Italian example. Potentially, humanitarian corridors can be replicated in all Schengen countries.