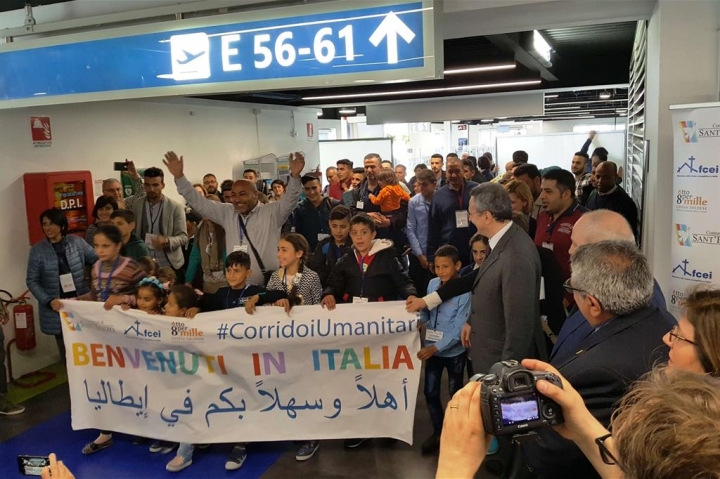 Eight-hundred. There have been 68 refugees leaving the Terminal 3 of Fiumicino airport: Syrian refugees with their children in front holding a welcome banner and saying aloud: “Viva l’Italia”. These people are the most vulnerable cases that have been identified in the Lebanese refugee camps thanks to the pilot project of humanitarian corridors, launched by the Community of Sant’Egidio, the Tavola Valdese and the FCEI. Other 57 refugees are landing the morning after. In total, almost 800 have arrived of the thousand planned to enter over two years.

Nearly half of them, 48, are minor including many children and some infants. And then, single mothers, young people in need of care like the boy using crutches. After landing at 6:35 AM, they have been carefully identified by the Border Police, also thanks to the fingerprints. Then, these people entered the hall in which have been waiting the families, the parish priests and the communities that have long organised their reception and integration in the Italian local communities.

Board and lodging, legal support, health-care, Italian courses, school and professional placement: all at the expense of the promoters thanks to the funds collected by Sant’Egidio and the 8 per thousand of the Waldesian Church. They will be assisted and helped to integrate the local society and live by means of their work. Everyone arrives with the valid documents for request refugee status, thanks to the memorandum of understanding that the promoters signed with the Ministry of Foreign Affairs and the Interior. In Europe, this process is becoming a standard model among the countries that are looking for a standard process to impact the traffickers’ business, arrange safe arrivals against the risky boats used so far, as well as ensuring the arrival of migrants who have been identified before leaving.

To welcome them in Fiumicino there have been the Deputy Foreign Minister Mario Giro, the President of the Community of Sant’Egidio, Marco Impagliazzo, Paolo Naso representing the Protestant Churches in Italy, and Donatella Candura of the Civil Liberties Department of the Interior Ministry. Then, the parishes, the families, the communities that will manage these people. And the other Syrian refugees arrived in recent months and now at Fiumicino to reunite with siblings, parents, kid and friends. “We are going to reach the thousand units” said Mr. Impagliazzo, “the first step of a major project that will continue: we have already confirmed the Interior Ministry that the program will be extended to other people. This process works and it has also been welcomed by France, the Vatican State, San Marino and other entities. We hope that it will be soon accepted also in Spain.” On March 14, The Community of Sant’Egidio signed a similar agreement in Paris at the Eliseo in the presence of President Francois Hollande.

For the Deputy Foreign Minister, Mario Giro, “these new 125 arrivals with humanitarian corridors still show that it is possible to organise safe and legal travels to reach those who are in need of humanitarian protection and possibly those who need our labour market since this situation of total closure has been creating a drive towards illegality, not only concerning the travel by sea, but also the human trafficking in Africa linked to illegal work in Puglia. And that is a real scandal. We must observe the phenomenon and observe it all together.”

Among those who are waiting there is Don Renzo Zocca, parish priest of S.Lucia di Pescantina, village close to Verona and chief of the foundation L’Ancora. His group have welcomed a mother and two little girls: 25-year-old Fatima with Rama, 7 years and Maran just 4 months. The father will arrive in summer. They will live at Emma’s place who until yesterday was alone in her large flat and met the appeal made by Don Renzo. An important role of interpreter for the 20-year-old Soukaina, born in Morocco, but in Italy since she was a child. The parish knew hes sister who was a volunteer in the elderly centre. Soukaina helped the local Red Cross unit and was recruited by Don Renzo. Even though she is a Muslim,isn’t she? “The Lord is one,” they say together with the mood of who has answered a useless question. Don Renzo has been in Santa Marta this morning. He reported the Pope what he would do later in the morning. “Well, well,” the Pope told me, “keep doing this way.” The project has involved Pescantina local council, which has already joined the Sprar, and the entire parish community.

Instead, Don Giovanni Pittorru will bring his “family” to Sardinia. He is the Director of the Caritas unit in Tempio-Ampurias. One of his parishioner offered this family a flat in Badesi, on the sea and for free. “In addition, one hotel has already told us that they are ready to offer the father a job.” We have succeeded in transforming the hospitality of Sardinia, land of passage, in charity.” “We have shown that humanitarian corridors are possible – Mr. Naso said – and the integration as well. We have students who went back to school or young farmers who have been cultivating depopulated areas in Calabria.”